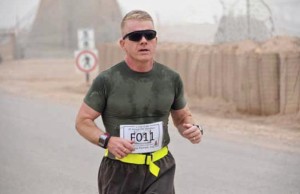 Some 30,000 runners will descend on Arlington on Oct. 30 for the 36th annual Marine Corps Marathon.

On the same day, half a world away, Maj. Brian Mullery, an Arlington native and Marine plans officer, will participate in a Marine Corps Marathon-sponsored “satellite marathon” at Camp Leatherneck in Afghanistan.

Mullery, whose love of distance running began during his recruit training nearly 29 years ago, says he’s looking forward to what will be his lucky seventh marathon. It’s also the second marathon he’ll have run while deployed.

Running long distances — whether its during a marathon in Iraq or during morning jogs while stationed in Paris — has given Mullery time to get away from the daily stresses of work while keeping in shape, he says.

“I remember my lieutenant who was a physical fitness major when I was a sergeant with 1st Battalion, 9th Marine Regiment,” Mullery told military journalist Cpl. Jeff Drew. “He would say, ‘If you want to survive and you want to enjoy life when you retire, you need to have the mentality of fitness for life.’ That’s something he told me when I was 25, and almost 25 years later I still try to do that.”

As a bonus, Mullery says his rigorous running routine could save his life some day, should he ever find himself in a situation where his physical endurance is tested in a war zone.

“When the worst day of my life becomes a reality, I want to be able to talk about it the next day,” he said.