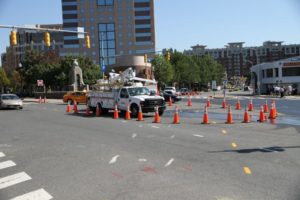 (Updated at 4:15 p.m.) Verizon utility work is still blocking part of the busy intersection of Wilson Boulevard and Washington Boulevard in Clarendon.

The work has been on-going since late last night, after an underground cable was damaged by a contractor. Verizon says work in the intersection could continue through tomorrow morning.

“A contractor performing work to install traffic light control cables bored through one of our underground cables, affecting service for several hundred customers in the area,” said Verizon spokesman Harry J. Mitchell. “We will have to replace the damaged section of cable, and we’re preparing to do that. We hope to have all work done, and service restored to all customers, by 8:00 a.m. tomorrow (Oct. 7).”

Verizon crews are working in two manholes in the middle of the intersection. Water is being pumped out of one of the manholes and onto the street. Traffic is still getting by on each street in the six-point intersection, though some lanes are blocked.

Less than three weeks ago, Verizon phone and internet service was knocked offline for hundreds of customers in the Courthouse/Clarendon area when a contractor accidentally cut through several underground cables. 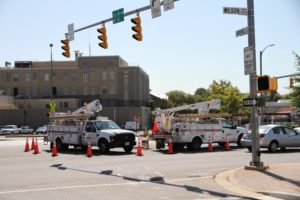 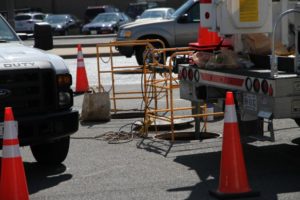