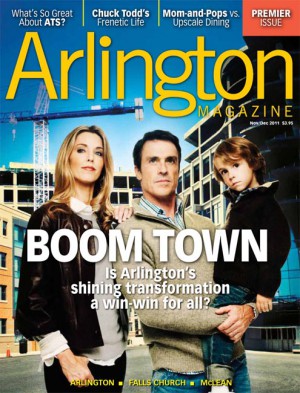 The premier issue of Arlington Magazine has started rolling off the presses.

The bimonthly lifestyle magazine should start hitting newsstands and subscribers’ mailboxes late next week. In the meantime, we’ve been sent a sneak peek of the cover (left).

Articles in the new magazine include a profile of NBC News correspondent and Arlington resident Chuck Todd (entitled: “I’m Not Ron Burgundy”), a look at eating disorders among adult women, a feature on mom-and-pop eateries in a time of restaurant “gentrification” and an obligatory chat with ‘Arlington Rap’ guy Remy Munasifi.

There are also restaurant reviews, real estate statistics, a listing of community events and more.

See the press release on the magazine’s first issue, after the jump.

Residents in and around Arlington, Va. now have a magazine to call their own with the launch of Arlington Magazine. The new print magazine, the sibling publication of Bethesda Magazine, explores and celebrates life in Arlington, McLean and Falls Church.

Hamilton launches the new bimonthly magazine with partner Steve Hull, a veteran publisher who owns Bethesda Magazine, which launched in 2004 and has achieved widespread popularity in the communities it serves.

“We believe that Arlington Magazine—like Bethesda Magazine—will be successful because it will deliver high quality content that is truly local and relevant, while providing local businesses with a targeted, cost-effective way to reach educated, affluent residents,” Hull said.

Published six times a year, Arlington Magazine brings the editorial and design standards of a national magazine to the community while covering the lives and lifestyles of local residents. Twenty-five thousand copies of the first issue will be distributed to subscribers and prospective subscribers, local newsstands and other retail establishments, and prominent public places, such as doctors and dentists’ offices.

To learn more or to subscribe, please visit www.ArlingtonMagazine.com.