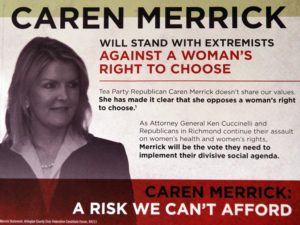 While the 31st District state Senate campaign started out on a surprisingly positive note, mailers paid for by the Democratic Party of Virginia and authorized by Favola have now gone negative. The mailers contain sentences like: “Caren Merrick will stand with extremists against a woman’s right to choose” and “Tea Party Republican Caren Merrick doesn’t share our values.”

At least two such mailers have been sent to 31st District residents in as many weeks. Two earlier Democratic mailers focused more on Favola’s positives — including support for education and Arlington’s low unemployment rate — although both also made reference to her commitment “to protect a woman’s right to choose.” 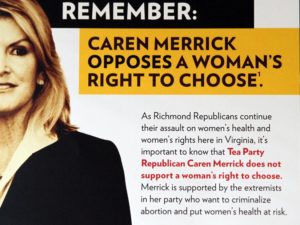 Previously held by the now-retired Sen. Mary Margaret Whipple, the 31st District became a lot less Democratic after this year’s redistricting process (44.4 percent of the redrawn district voted for Republican Gov. Bob McDonnell, compared to 34.7 percent of the old district). Favola is apparently betting on abortion being the issue that convinces complacent Democrats, used to easy state Senate victories, to go to the polls.

Merrick’s campaign, meanwhile, has remained overwhelmingly positive — focused on issues like jobs, the economy and Merrick’s business background —  much to the surprise (and, in some cases, delight) of local Democratic operatives. In debates and in her campaign literature, Merrick largely avoids social issues like abortion and gay marriage.

“The Merrick campaign believes Ms. Favola, is using false, negative campaign tactics to hide her 14 year record on the Arlington County Board where she has ignored the wishes and concerns of local civic associations, increased spending 70%, increased her own pay by 59%, and filed a 2 million dollar lawsuit halting critical transportation solutions and naming government workers personally liable,” the campaign said.