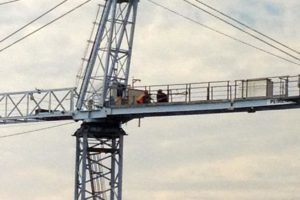 (Updated at 3:45 p.m.) Police and firefighters have responded to the area around Clarendon Blvd and Oak Street, in Rosslyn, where a worker has suffered a medical emergency while in a tall crane.

A technical rescue team from the Arlington County Fire Department will soon be trying to use the crane itself to lower the worker 250 feet to the ground, according to department spokesman Lt. Gregg Karl.

Karl did not know the exact nature of the worker’s medical emergency.

Police have shut down parts of Oak Street and 17th Street to attend to the situation. The crane is on the Sedona and Slate apartment construction site, which was the scene of a retaining wall collapse in August.