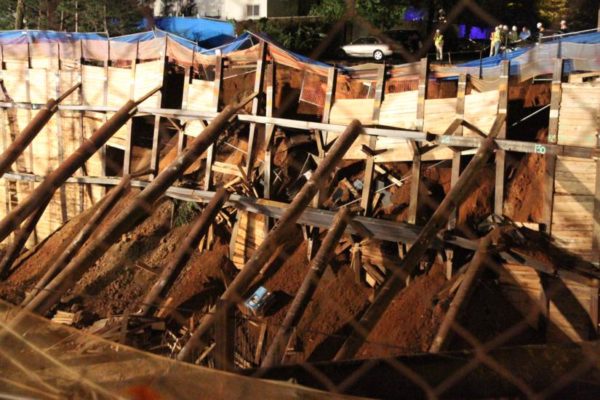 Update at 1:35 p.m. — See this post for the latest on the road closures surrounding the site.

A large retaining wall at the Sedona and Slate apartment construction site gave way following this evening’s heavy rains, allowing earth and debris to spill into the construction pit. The collapse raised fears of an even bigger structural collapse.

Clarendon Boulevard will be closed between Pierce Street and Oak Street “for the foreseeable future,” according to Arlington County Fire Department spokesman Lt. Gregg Karl. Parts of Ode Street and several other roads in the area are also closed.

The Swansen Apartments, at 1625 N. Ode Street, has been evacuated while structural engineers determine whether the building is in danger of collapsing as a result of the failed retaining wall. The building sits on the edge of the landslide that occurred after the wall collapse.

Residents of the Swansen Apartments, who spoke to ARLnow.com on the condition of anonymity, said that they’ve noticed widening cracks in the building’s basement and in the pavement of the parking lot adjacent to the building within the past two weeks. The residents said they recently saw workers measuring the cracks.

About 10 apartment residents have been displaced and will be placed in temporary housing, Karl said. He said other residents found alternate housing on their own. Between 20 and 35 people live in the building, according to resident and fire department estimates.

As of 11:00 p.m., Clark Construction, the primary contractor on the Sedona and Slate project, had around a dozen employees on scene assessing the situation. Arlington County engineers were also on scene, Karl said. The Red Cross arrived to assist displaced residents, and the Falls Church Volunteer Fire Department arrived to provide food and drink to emergency workers.

So far, there has been no indication that there’s any danger to a large construction crane at the site.