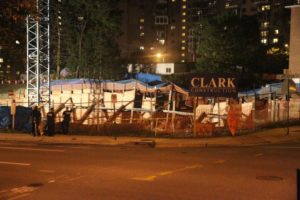 Update at 7:35 a.m. on 8/9/11 — Clarendon Boulevard has reopened, but neighborhood streets in the area of the collapse remain closed.

Update at 5:55 p.m. — Clarendon Boulevard and 16th Street will both remained closed between N. Pierce Street and N. Oak Street through the morning rush, the county said this afternoon.

Update at 1:10 p.m. — The processes of shoring up the collapsed retaining wall could take up to 48 hours, according Arlington County Inspection Services Division Chief Shahriar Amiri. While some road closures will remain, Amiri said that Clarendon Boulevard may reopen as soon as tomorrow’s morning rush hour. “We are working hard at it,” he said.

The road closures related to last night’s construction site collapse are expected to remain in place through tonight’s evening rush hour. Heavy traffic is expected as a result.

Arlington’s Office of Emergency Management issued the following alert just after 10:30 this morning.

It is anticipated that both lanes of eastbound Clarendon Blvd (N. Pierce St. to Oak St.) will remain closed through the evening rush hour, related to the construction site collapse.

On northbound Rte 110, the Rosslyn exit (via Wilson Blvd) has also been closed to relieve congestion. Motorists are encouraged to continue onto westbound I-66 to the Lee Hwy exit.

Lee Hwy (Rte. 29) and Arlington Blvd (Rte. 50) are the suggested routes for getting to and around Rosslyn. Those with plans in Rosslyn should expect major traffic delays. Transit, pedestrian & bicycle routing will also be affected.