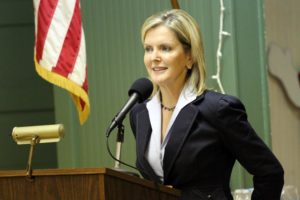 This week we asked the two candidates for the 31st District state Senate seat to write a sub-750 word essay on why the district’s residents should vote for them on Tuesday, Nov. 8. Caren Merrick’s campaign says they did not receive our request (emailed to the campaign manager), and thus were late in responding.

Here is the unedited response from Caren Merrick (R):

I’m running for the Virginia State Senate because I believe that in these uncertain economic times we need a State Senator who understands how to create jobs, help grow our economy, and make wise investments that will help individuals, families, seniors, and veterans succeed in education, work, and life.

As a candidate, I’ve listened to thousands of voters. I can tell you firsthand the top concern is jobs and the economy.

The region’s unemployment rate is nearly double what it has been. Our #1 employer is the Federal Government and the 2nd largest employer group is the contracting community that serves it. Major contractors are already feeling the pain of Federal spending cuts. Is our region ready for the cuts to come? Absolutely not.

We must diversify our economy and unleash Northern Virginia’s entrepreneurial capacity. I understand the challenges of starting and growing a business and creating jobs. I cofounded a software company in my basement, went without a paycheck for a year so we could pay employees, overcame many obstacles and grew our company to more than 1,100 employees. My plan to grow our economy addresses business tax and regulation reform, transportation, and education as we need to improve all three areas to advance a growing economy and a brighter future.

To spur the growth of new and existing businesses, I propose comprehensive tax and regulation reform, including a pay-as-you-go regulatory environment. For every new regulation we add, we need to remove an outdated one of equal cost from the books. We also need to reform Virginia’s tax code to make it simpler, fairer and more conducive to competition and economic growth.

Another key to growth is enacting a stronger R & D tax credit to promote innovation and job creation across our region and boosting industry sponsored research and collaboration with Virginia’s universities.

Transportation – we must prioritize spending based on congestion relief. This sounds obvious, but a bill to do just that was blocked in the last session of the General Assembly. We need a dedicated source of revenue and I support revenue from offshore oil leases as studies show it can be done safely and it is estimated that it would produce 15,000 jobs and $3.2 billion to our Commonwealth – and it has received strong bipartisan support from Senators Warner and Webb, Governor McDonnell, and candidates for U.S. Senate Tim Kaine and George Allen.

Education – I have proposed cost effective ways to introduce science, technology, engineering, and math at earlier grades to ensure that our kids are prepared for jobs of the future. And we need to increase the college graduation rate across the Commonwealth.

I served on the Governor’s bipartisan Economic Development and Jobs Creation Commission where 92% of our jobs and opportunity agenda passed with strong bipartisan support.

I’ve been endorsed by leading bipartisan business groups such as the Northern Virginia Technology Council NVTC TechPAC, the Fairfax County Chamber of Commerce, the National Federation of Independent Business, the Associated Builders and Contractors, and the Chinese American Chamber of Commerce. Most of these organizations endorsed other Democrats, but not Barbara Favola.

As you know, elections are about choices. Barbara Favola often talks about being proud of her record. I would like to highlight a couple of differences between Ms. Favola and I.

First, Ms. Favola would like to raise the gas tax to fund transportation projects. I disagree; this would hurt working families and seniors in these tough times.

Ms. Favola increased spending by 70% while on the County Board. She has raised taxes many times, while giving herself a 59% pay increase, all this while some school kids in Arlington sit in trailers.

Finally, she was a champion for wasting $2 million of taxpayer dollars on a lawsuit personally attacking government workers and blocking transportation solutions that would relieve congestion in the region. A lawsuit which The Washington Post said “undercut (Arlington’s) own economic interests.”

I’m running on jobs and the economy while my opponent wants to talk about the NRA. It’s worth noting that Senators Mark Warner and Jim Webb have A ratings from the NRA and both have received strong support in the 31st District.

I welcome ideas and support from all. I have strong support from Democrats, Independents, and Republicans because they know that, unlike Ms. Favola, I understand the first hallmark of leadership is to listen, then find common ground, and work together to push for solutions.

I ask for your vote on November 8.