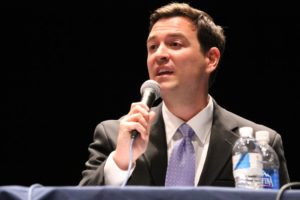 This week we asked the two candidates for the 32nd District state Senate seat to write a sub-750 word essay on why the district’s residents should vote for them on Tuesday, Nov. 8. The campaign of Sen. Janet Howell (D) says they were unable to respond in time.

Here is the unedited response from Patrick Forrest (R):

Arlington deserves a State Senator that will bring back more of our tax dollars for transportation and education needs. Arlington needs someone who will champion our independent spirit.

I grew up in Arlington. I lived here as an adult and love this community. Arlington has grown and changed, and now it needs new leadership that reflects our diversity and passion for our neighborhoods and community. Throughout my professional career as a senior official in the federal government, I have created a proven record of building coalitions to get the job done! I will be an independent voice to ensure that Arlington gets our fair share of funding for our roads and schools.

After 20 years in the job, my opponent, Senator Janet Howell, as a senior member of the Budget Committee, has had the opportunity to bring more funds to Northern Virginia for schools and roads but has failed to do so. To the detriment of her constituents, the record shows that her priorities have been elsewhere. Unfortunately, as a senior member of the Budget Conference Committee, Senator Howell has not pushed for changes in funding formulas to help Northern Virginia. She helped kill bipartisan legislation in her committee sponsored by Democrat Senator Mark Herring that would have increased state funding for our local schools (SB1243).

Senator Howell also opposed a bipartisan bill (HB1998) to direct VDOT to focus resources on traffic congestion relief in order to increase funding for our roads here in Northern Virginia. These common sense pro-Northern Virginia pieces of legislation would have significantly increased funding for our region. To add insult to injury, Senator Howell failed to submit a budget amendment officially requesting funds for Metrorail to Dulles airport. This massive failure of leadership will cost this community dearly.  In each and every one of these cases, 20 year incumbent Senator Howell, put corporate interests and Richmond over those of her constituents in Northern Virginia. 20 years is too long, and it is clear Senator Howell has overstayed her welcome.

Senator Howell’s corporate interests shouldn’t surprise anyone. Almost all of her campaign funds, 86% to be exact, come from corporate lobbyists and big developers outside of her district. Unfortunately, now Senator Howell has chosen to utilize the politics of hate in order to win this election by any means necessary. As stated by The Gay & Lesbian Victory Fund: “The Washington Blade reported last week that [Forrest’s] opponents’ political supporters have been visiting Republican voters in the district to warn them that Patrick is openly gay and has a partner. That kind of divisive campaigning has no place in politics, and it’s wrong no matter which party does it.”  The article goes on to report that an audio tape of one of their grassroots organizers confirmed this strategy: “What my campaign is saying is here’s your Republican candidate. He’s a homosexual. Why would you want to vote for someone who’s a homosexual and is going to push his agenda in your schools?”

The message is clear. It’s time for a change. We cannot allow these career politicians and their operatives to use these kinds of divisive tactics as a political strategy. I want to bring a new perspective, fresh ideas and an independent voice to Northern Virginia.

We need a Senator that pushes beyond political games, partisanship, and focuses on building coalitions that fight for Arlington’s fair share of state funds. I am the Republican nominee for State Senate and will work every day to keep more of our tax dollars in Arlington to improve traffic congestion on I-66, hire additional ESL teachers, build more and better sound walls, and protect our bike paths. I’m also proud to have the endorsement of the Gay & Lesbian Victory Fund. The Victory Fund stated the following about my candidacy: “Patrick Forrest is openly gay and will make history by being elected to the Virginia State Senate. Patrick will be an effective independent voice able to work on both sides of the aisle for diversity and equality.”

It is time for a change and time for Arlingtonian’s voices to be heard in Richmond. I’m asking for you to show our independent spirit and the Arlington way by voting for me this November 8th.