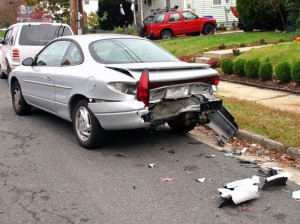 Less than seven months after a car ran into his house in the Claremont neighborhood, Patrick Lee is dealing with a similar problem. Somebody hit his car overnight, likely while trying to speed through the crash-prone traffic circle at S. Chesterfield Road and S. Dinwiddie Street.

Lee said his father woke him around 5:00 a.m. asking what happened to his car. That’s when he went outside to find the banged-up vehicle. The other driver left nothing behind except a few shards from a smashed headlight, which Lee hopes will eventually help police find the perpetrator.

Lee’s car had been parked on the street in front of his neighbor’s house when it was hit. He explained that three houses on the block, including his, had all recently sustained property damage from vehicles speeding through the traffic circle. The next-door neighbors escaped a car slamming into their home when the vehicle rammed a tree in the front yard instead.

Lee says when his home was hit in April, the person behind the wheel didn’t end up paying for repairs. A loophole voided her insurance because she uses the vehicle for work. That meant Lee and his parents had to pay about $5,000 out of pocket for repairs. The total estimated cost for damage, both outside and inside, ended up being about $28,000.

Neighbors are concerned not only for their own property and safety, but also because of the traffic circle’s proximity to Wakefield High School.

“I drive for a living and spend a lot of time in traffic,” Lee said. “Never, not anywhere in Northern Virginia, Thailand or other countries, never have I seen such a poorly maintained and dangerous intersection next to a school.”

The intersection has two stop signs and two yield signs for drivers entering the circle. People in the neighborhood say drivers speed through the circle without stopping or even slowing down. Lee mentioned that the layout of the intersection has been changed several times, but a good solution has yet to be found.

“You really have to be flying through these stop signs for something like this to happen,” Lee said. “This is right next to a school and everybody is going 45 to 50 miles per hour and not stopping.”

Lee said he talked to the responding officers about fixing the intersection when his house was hit in April. Although he doesn’t have an easy solution, he said a good start would be a four-way stop. In the meantime, Lee is going to contact his insurance company about his car, and hopes to find the driver who hit it. 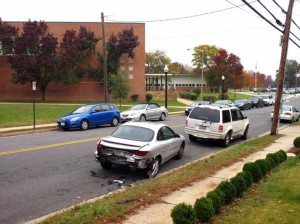 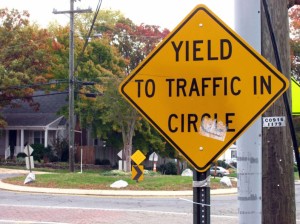