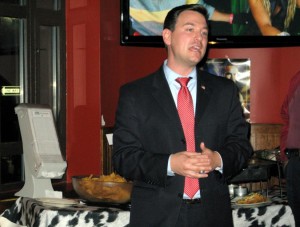 Although Democrats swept the races in Arlington County, that didn’t dampen the spirits of those who cast votes for Republicans and Green Party candidates.

A few dozen die-hard Republicans turned out at Hard Times Cafe in Clarendon for an Arlington County Republican Committee victory party that, in the end, had few victories to celebrate. State Senate candidate Patrick Forrest briefly mingled with the crowd early in the night. He was full of optimism, even as returns showed him steadily behind incumbent Democrat Janet Howell.

“It has been a hard, uphill slog,” Forrest said. “But keep your fingers crossed.”

Forrest said this election made him realize how important it is to employ a good campaign staff. He touted their tireless efforts, particularly in an area where getting people to vote Republican can be challenging.

“I now understand that the candidate is really just a small part of the campaign,” he said.

ACRC Communications Director Jeff Miller said Forrest was great for a first time candidate. Miller believes Forrest and the other Republicans would have received higher numbers if more voters had gone to the polls. 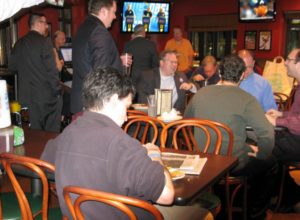 “Turnout figures today are a reminder of how many voters in Arlington don’t pay close attention to state and local politics,” Miller said. “No matter how hard you try, there are just some people you can’t lure in.”

Miller said that Forrest had some great ideas for improving transportation in Northern Virginia, but it didn’t seem to resonate with voters.

Early optimism over the candidacy of Caren Merrick ended with a disappointing defeat. The McLean businesswoman came up short in her state Senate bid, falling to Democratic Arlington County Board member Barbara Favola.

Merrick’s campaign lacked the excitement that some expected, but the mother of two told the Sun Gazette that she fought the good fight.

“I really wanted to run the kind of campaign my children would be proud of,” Merrick said, according to the paper.

Green Party County Board candidate Audrey Clement came in third behind incumbent Democrats Mary Hynes and Walter Tejada. It took her a while to learn of the final numbers, having been more focused on meeting with supporters at Northside Social in Clarendon. Clement said although she’s obviously disappointed with the results, she’s not surprised. She attributes the outcome to voter apathy. Clement believes the average voter is frustrated with the system and blocks out everything related to politics or elections.

“We’re just not going to see success until people stop ignoring the elections and start voting,” Clement said. “Voters are turned off to both Republicans and Democrats, so they punish anyone who might be an alternative.”

Although disappointed, Clement is not discouraged.

“I think eventually people are going to realize the importance of the ballot box,” she said.

The main issue Clement hoped voters would support her on was opposition to the Columbia Pike streetcar. The $140 million project demonstrates a problem with the County Board and its willingness to throw money, Clement said, at high-priced projects Arlington doesn’t need. She believes such projects will lead to tax hikes.

“If I had been elected, the county budget would have been scrutinized more carefully so no tax hikes are involved,” Clement said. “Money for wasteful projects would have been redirected to schools.”

On the upside, Clement said she had wonderful weather to make a last push at meeting voters on election day.

“I like dealing with average voters better than those on the fringe. The truth always lies more in the center,” Clement said. “But I can’t seem to get the average voter to see that I’ve got a platform that will appeal to him or her.”

Clement said she will definitely run again, in the upcoming County Board special election, if she gets the endorsement of her local party.