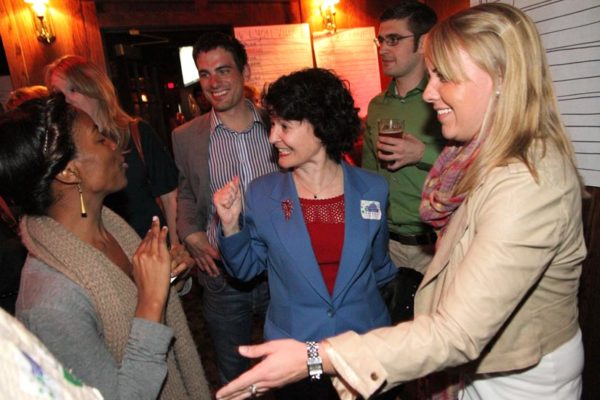 (Updated at 2:05 a.m.) It was a joyous election night for local Democrats, who are claiming victory in all 14 races run in Arlington.

Democrat Barbara Favola has won a decisive victory over Republican businesswoman Caren Merrick in the race for state Senate in the 31st District — one of the most closely-watched races in Northern Virginia. With all precincts reporting, Favola had 58 percent of the vote to Merrick’s 42 percent. Favola, who has spent 14 years on the Arlington County Board, was ebullient over the hard-fought win.

“It’s exhilarating, it’s humbling, it’s exciting,” she said of having the race called in her favor. Favola credited her campaign staff and volunteers — who knocked on 51,000 doors and made 125,000 phone calls — for bringing home the win.

“We have the best field team in the state,” Favola declared.

Favola said her first action in Richmond will be securing funds for Northern Virginia Community College. Arlington political watchers can now look forward to a special election process in 2012 to fill her soon-to-be-vacant County Board seat.

Democratic Del. Adam Ebbin will be moving to the state Senate. Ebbin has easily defeated Republican Tim McGhee in the race for the state Senate’s 30th District. With 94 percent of precincts reporting, Ebbin has 66 percent of the vote to McGhee’s 34 percent. Ebbin, the first openly gay member of the House of Delegates, will now become the first openly gay member of the Virginia Senate.

Democrats Mary Hynes and Walter Tejada will be back on the Arlington County Board for another four years. With 100 percent of precincts reporting, Hynes and Tejada have 42 percent and 40 percent of the vote, respectively, to Green Party candidate Audrey Clement’s 17 percent.

Del. Bob Brink, meanwhile, has won handily against his two challengers and will serve another two years in the Virginia House of Delegates. With 96 percent of precincts reporting, Brink has 69 percent of the vote to 24 percent for independent candidate Kathy Gillette-Mallard and 7 percent for Independent Green candidate Janet Murphy. Brink represents Virginia’s 48th District, which includes parts of north Arlington and McLean.

Alfonso Lopez will become one of the first Latinos elected to the Virginia General Assembly, after running unopposed for the House of Delegates in the 49th District. Lopez pledged that Arlington Democrats will “wear our progressive values on our sleeves in Richmond.”

Other winners include Sheriff Beth Arthur, Commissioner of Revenue Ingrid Morroy, Treasurer Frank O’Leary and Arlington School Board Member Abby Raphael, all of whom were re-elected.

Moran said that Favola also prevailed due to her experience on the County Board.

“Barbara has devoted her whole life to the community,” Moran said. “People like Barbara Favola are going to be working for everyone, whether they’re rich or poor or whatever demographic.”

“I’m delighted,” Moran said of the Democratic sweep in Arlington. “These are the people I’m looking forward to working with.”

The Arlington County Democratic Committee, with its well-honed precinct and get-out-the-vote operations, was another factor that helped propel Democrats to victory in Arlington.

ACDC Chair Mike Lieberman said party activists made a total of 40,000 phone calls and knocked on 12,000 doors in Arlington during the general election cycle.

Sen. Janet Howell is running against Republican Arthur Purves for her bid for reelection
Previous Image 1/15 Next Image