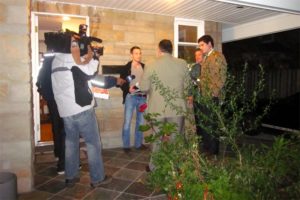 A trio of Good Samaritans were rewarded for their heroic deeds with a fresh pizza delivered by the Arlington County Police Department.

Police officers dropped off the pizza and some commemorative plaques on Friday night as a way to say ‘thank you’ to three men who helped stop a late night attack in Ashton Heights over the summer.

According to police, two of the men were sitting out on their porch, waiting for a pizza delivery around 2:30 a.m. on Sunday, Aug. 14, when they heard a woman scream. The woman, police say, was knocked to the ground by a 25-year-old man after repeatedly rebuffing his unwanted advances. Upon hearing the scream, the men chased down the suspect and held him until police arrived. The third man rushed to the victim to comfort her while awaiting police.

During the course of their heroism, the men missed their pizza delivery. As a good-humored recognition of their small sacrifice, police delivered a hot, fresh pizza along with the plaques on Friday.

The men told NBC4 that the gesture “means a lot” to them.