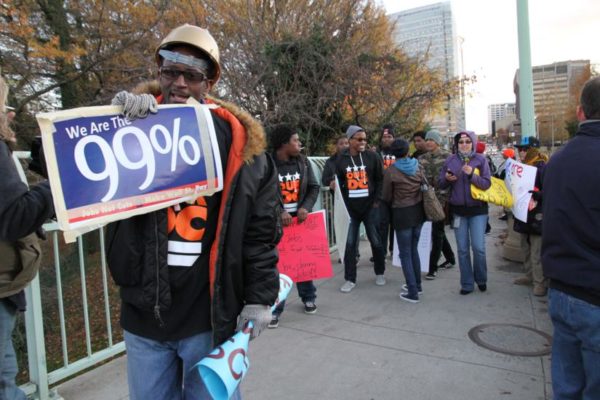 Update at 5:55 p.m. — The few protesters who made it to the Virginia side of the Key Bridge were “pretty low-key,” says Arlington County police spokeswoman Det. Crystal Nosal. No arrests were made and no injuries were reported. A small group of young protesters wearing anarchist symbols and bandanas over their faces had a brief but peaceful confrontation with Arlington police that ended with the group crossing back into D.C.

Update at 4:50 p.m. — After a peaceful occupation of one of the bridge’s sidewalks, protesters have largely dispersed. Traffic on the Key Bridge is currently light and unobstructed.

Earlier: Several dozen Arlington County police officers in riot gear are stationed on the Virginia side of the Key Bridge, waiting to see if protesters from the Occupy D.C. movement decide to cross.

The heavy police presence on the Rosslyn side of the Potomac is accompanied by the presence of D.C. police mid-span and on the Georgetown side, and a U.S. Park Police helicopter overhead.

A couple hundred protesters are said to be marching in the District, compared to just over a dozen ‘Occupy NoVA’ demonstrators — mostly Verizon CWA union members — who marched down Wilson Boulevard around 3:00 this afternoon.