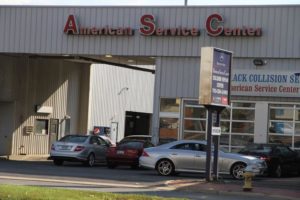 A long-time employee of American Service Center in Ballston (585 N. Glebe Road) died on Saturday in what’s being described by as a tragic workplace accident.

The 56-year-old employee, whose identity has not yet been publicly released, was attempting to move some cars around a service area using a stackable lift when the accident happened.

“It appears the lift came down on him,” said Arlington County Police Department spokesman Lt. Joe Kantor. “We still don’t know how it happened yet, that’s part of the investigation. It’s being classified as an industrial accident at this time.”

Police received multiple calls reporting the accident just before 4:30 p.m. on Saturday, according to the initial dispatch. The employee, who suffered significant head trauma, was pronounced dead on the scene.

The man had worked for American Service Center for about 20 years, Lt. Kantor said.