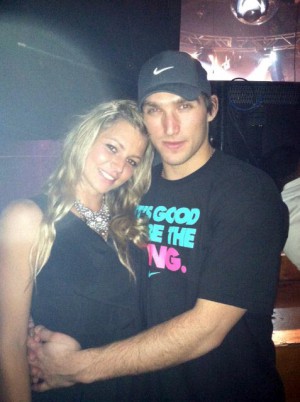 Via the Montreal Gazette, of all places, comes word that Capitals star Alex Ovechkin’s new girlfriend has been hanging around Arlington as of late.

Russian tennis star Maria Kirilenko has been photographed working out with the George Washington University tennis team, presumably at the indoor Sport & Health Club courts in Crystal City. She has also been spotted at Capitals practices, presumably at the Kettler Capitals Iceplex in Ballston, according to the Gazette.

Ovechkin, who lives in a $1.6 million home in Arlington’s Waycroft-Woodlawn neighborhood, recently confirmed the relationship by Tweeting out a photo of the happy couple (left). Before that Tweet, however, the Gazette could only speculate as to why Kirilenko seemed to be spending so much time in our fair county.

“In all seriousness, putting aside the fact that this is pretty good gossip, if you’re a Russian tennis player and you choose … Arlington, Va. for some indoor practice, it’s probably not because you’re an American history buff,” the paper said.

Let us know via email or the comments if you spot Ovie and his new GF out on the town.