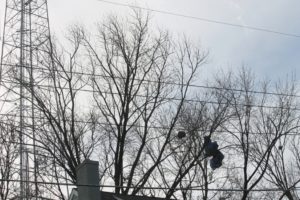 Residents near Big Walnut Park report being surprised by odd noises around 10:30 last night. When they checked outside, they discovered that someone had apparently performed a parachute jump off the WETA television tower.

The jumper reportedly became tangled when she landed in a tree in the 5200 block of N. 19th Rd. Onlookers say they saw her detach from her parachute and attempt to climb down the tree. She fell and was taken to the hospital for her injuries.

Police charged five people with trespassing for climbing the tower: three men, ages 48, 30 and 25, along with two women, ages 48 and 30. The jumper is listed as being from Litchfield, CT.

The parachute remains in a tree, which is in a residential backyard. So far, it’s unclear how it will be removed.