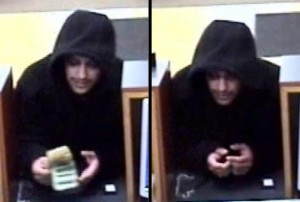 Police have released surveillance photos of the man they say robbed a bank on Columbia Pike yesterday afternoon.

Police say the man walked into the Bank of America branch on the 3400 block of Columbia Pike at about 3:20 p.m., implied he had a weapon and demanded money. He fled on foot after receiving cash.

“The suspect is described as a white Hispanic male in his early 20’s, 5’7” to 5’8” with a medium build,” Arlington County Police said in a press release. “At the time of the robbery he wore a black hooded jacket and dark pants.”

“Anyone who has information about this robbery or the identity of the suspect is asked to call the Arlington County Police Department Tip Line at 703 228-4242, or Detective John Donaggio at (703) 228-4167,” the press release continued. “Det. Donaggio can also be reached by email at [email protected]”