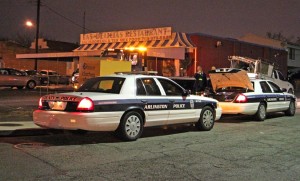 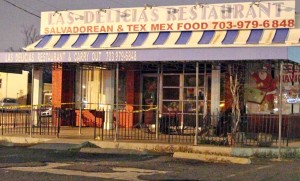 Four men were arrested Friday night after a large fight broke out at Las Delicias Restaurant, on the 1600 block of S. Walter Reed Drive.

Police say a group of men assaulted several people at the restaurant around 9:30 p.m. One of the victims was assaulted with a shovel, causing a serious leg injury, according to police.

Following the fight and the arrests, police used crime scene tape to cordon off part of the restaurant’s front patio, where chairs and tables could be seen strewn about. Police then took photos of the scene and towed away a white pickup truck from the parking lot.

All lanes of N. Glebe Road near Chain Bridge are reported to be blocked during this evening’s commute, due to a combination of a disabled vehicle and a large pothole….