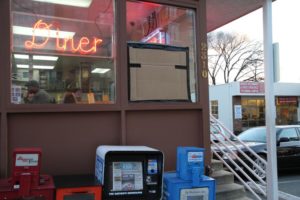 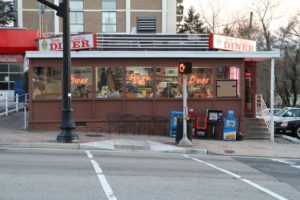 An early morning fight resulted in a broken door, a broken window and two arrests at Bob & Edith’s Diner on Columbia Pike over the weekend.

Police say Zachary Szabo, 23, assaulted Jamel Toms, 26, inside the restaurant around 3:30 a.m. on Saturday, Dec. 31. Toms then “became disorderly, broke the restaurant door, and threw a glass sugar container at a plate glass window, shattering it,” according to the daily Arlington County police report.

Toms, of Alexandria, was charged with “Releasing a Missile Into an Occupied Dwelling” and two felony counts of Destruction of Property. He was held on a $10,000 bond.

Szabo, of Woodbridge, was charged with Assault and Battery. He was held without bond.

The damage to the restaurant was still visible as of yesterday evening.

More Stories
Best Cellars to Be Replaced By SpaCandidate Is Running for County Board, Literally