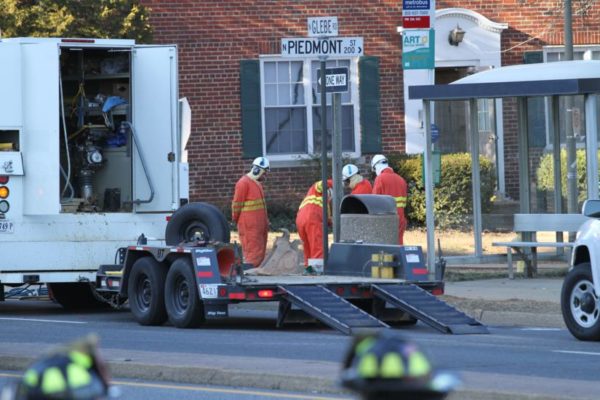 Update at 8:00 p.m. — One lane of northbound Glebe Road opened around 6:00 p.m., according to Arlington Alerts.

Update at 5:00 p.m. — The gas leak has been stopped, firefighters are clearing the scene, and the southbound lanes of Glebe Road have been reopened. So far, northbound Glebe Road remains closed.

Update at 4:00 p.m. — Washington Gas has told firefighters that they have located the source of the gas leak and that it will be about another half hour until they can shut off the gas.

All lanes of Glebe Road have been shut down between Route 50 and N. Pershing Drive due to a gas line rupture.

Initial reports suggest that a major gas line was cut by a utility crew, necessitating extended road closures. Crews from Washington Gas are on the scene using digging equipment outside an apartment building at Glebe Road and N. Piedmont Street. The building has been evacuated and a strong odor of natural gas can be smelled a block away.

Police are on the scene directing traffic. Firefighters are monitoring gas levels in nearby storm drains and standing by with fire hoses in hand should something ignite the gas. Pedestrians, including school children walking home from school, aren’t being allowed on a two block portion of Glebe Road.

Drivers should plan for possible significant rush hour traffic impacts as a result of the closure.