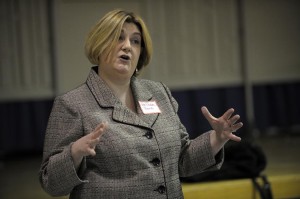 Over the past two nights, civic association debates between the six candidates running for County Board have been a remarkably civil affair. The candidates — five Democrats and one Green Party member — touted their records, focused on the issues, politely disagreed with some county policies, and refrained from directly criticizing one another.

Behind the scenes, however, mud is being slung, and it’s being directed at one Democratic candidate in particular: Melissa Bondi.

For the past couple of weeks, Republicans and Democrats alike have been bombarding local media outlets with dirt on Bondi — on and off the record — claiming she failed to register a car in Arlington and she has been late in paying her taxes on multiple occasions.

In an interview with ARLnow.com on Tuesday, Bondi had some answers, but professed surprise at the most serious charge: that she failed to pay the IRS $19,252.23 in taxes accrued between 2005 and 2006, resulting in a federal tax lien being filed in March 2011. (See: document provided to ARLnow.com.)

According to Bondi, she was not notified about the lien at the time and only found out about it this week via a post on a local blog. She said she immediately contacted the IRS and tried to find out why the lien was assessed.

Asked if she has, to her knowledge, paid all her federal taxes “in full and on time,” Bondi said yes.

But according to the Arlington County Treasurer’s Office, Bondi has not always paid her local taxes on time. A FOIA request filed by a local resident reveals that Bondi was twice delinquent in paying Arlington personal property taxes on her car. In 2004, Bondi was 14 days late in paying the tax. In 2005, she was 53 days late, and only paid “following a threat of seizure by the Treasurer’s office,” according to Treasurer Frank O’Leary.

O’Leary, who’s supporting the campaign of County Board candidate Terron Sims, did not mince words when sharing his professional opinion of Bondi with the Clarendon Patch.

“She is a scofflaw and tax evader,” O’Leary told the website. “If I sound a little angry about it, I am. She simply ignored us.”

Asked about the past delinquencies, Bondi would only discuss her current county tax situation.

If there were any tax delinquencies, she said, they were not intentional.

“In 2008, Melissa gave up car ownership and now takes full advantage of Arlington’s walkable, transit-oriented neighborhoods,” the “About Melissa” portion of the site says.

In our interview, Bondi confirmed that she drove a car up until 2008 — but asserted that it was her father’s car. Her father, she said, became sick in 2006 and let her use his car for her frequent trips to visit him in Pennsylvania. After her father passed away in 2008, she gave up the car. 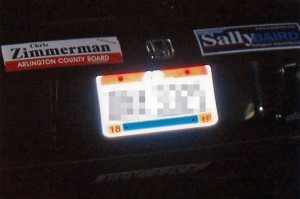 The county frequently sends letters to owners of out-of-state cars observed parking in Arlington for an extended period of time, reminding them that “every vehicle garaged in Arlington County must be registered with the Arlington County Commissioner of Revenue.” Since the car was in her father’s name, Bondi said, he would have handled any correspondence with county tax authorities. Bondi said the car’s registration “was the furthest thing from my mind” as she tended to her ailing father.

ARLnow.com was sent a photo of a black Honda, purported to be the car in question, parked in a Courthouse parking garage. The car has an Ohio license plate — Bondi’s father lived in Ohio and Pennsylvania, she said — and had political bumper stickers for County Board member Chris Zimmerman and School Board member Sally Baird.

One final car-related accusation against Bondi concerns two citations issued in 2004. According to court records, however, the two traffic charges against Bondi — driving on a suspended license and an expired Virginia inspection sticker — were ultimately dismissed.

Bondi said she intends to “clear and explain the record” wherever there have been “errors or mistakes.” In the meantime, she says she’ll continue to run on her track record as a “proven community leader” and an “accomplished public policy professional.”

As for what’s driving all the negative attacks from both Republicans and fellow Democrats, Bondi said that she wasn’t quite sure.

“I know that whenever you are going to assert priorities or positions… maybe not everyone is going to like everything you do all the time,” she said.

Off-the-record conversations with several of Bondi’s critics, however, have revealed one possible explanation.

Bondi is strongly endorsed by County Board member Chris Zimmerman. Since Zimmerman also worked to get Walter Tejada elected to the County Board, critics say that Bondi’s election would give Zimmerman a three-person voting block on the five-member Board — a virtual lock on legislative decision-making in the county.

Bondi, though, says she has disagreed with Zimmerman on votes before and will likely disagree again.

“I believe I already am serving as my own voice,” she said.

Democrats will choose their County Board nominee during caucuses on Thursday, Jan. 19 (at Washington-Lee High School) and on Saturday, Jan. 21 (at Kenmore Middle School).