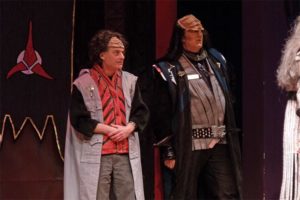 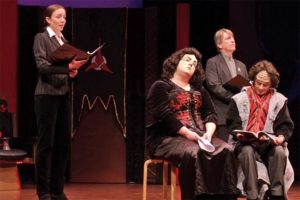 Klingon is making a theatrical comeback in Arlington.

Less than two years after the Arlington-based Washington Shakespeare Company made headlines with an evening of Shakespeare performed in the fictional Star Trek language, the company is planning on staging another Klingon production.

WSC Avant Bard, as the company is now known, will host “Shakespeare in Klingon II” at 8:00 p.m. on Sunday, March 4. The one-night-only performance will be held at Artisphere’s Rosslyn Spectrum theater, the company’s permanent home since vacating the Clark Street Playhouse in Crystal City. Tickets for the show/fundraiser are $85 and include two “flexible-use passes” for future WSC Avant Bard shows.

Among those taking the stage — besides the Shakespearean Klingon actors — will be WSC Avant Bard Board President Marc Okrand, creator of the original Klingon language, and the fortuitously-named Michael Kahn, Artistic Director of the (unrelated) Shakespeare Theatre Company in D.C.

“The revelry for Washington’s Shakespeare moniker will be in both English and Klingon, using scenes from Hamlet, The Tempest, and others,” WSC noted on its website. “In addition, the Company Benefit performance will include a short conversation with Marc Okrand about his work with the Star Trek franchise over the years, and an audience question and answer session with Kahn, Henley, and special guest Klingons at the conclusion of the show.”