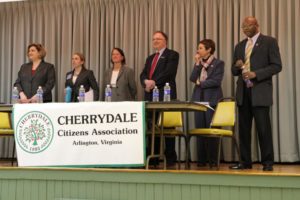 (Updated at 4:10 p.m.) Tonight, Arlington voters will head to Washington-Lee High School for the first of two caucuses to pick a Democratic nominee for County Board. In advance of the caucuses, six County Board candidates participated in a debate last night at the Cherrydale Volunteer Fire Department.

Here are some of the candidates, in their own words, on a few key issues brought up during the debate.

Kim Klingler: “We have large employers here who want to bring the best and brightest to Arlington County. And they want them to live here. So let’s hold some of our business owners accountable to see if they can assist us in providing affordable housing for their staff.”

Libby Garvey: “We can work more with developers on bringing them increased density to provide more affordable housing than they built. And we do indeed need to work with preserving our existing stock, and offering tax incentives or loans to the current owners to maintain the affordable housing that they have now.”

Peter Fallon: “We need to revisit the affordable housing bonus density that is available in the zoning ordinance to incentivize more developers to keep using it … At the same time we need to not sabotage [existing affordable housing]. Columbia Pike — the county’s own study has indicated that the trolley would raise the average affordable rent by 30 percent.”

Melissa Bondi: “I would look at new tools like community land trusts, looking at statewide tax relief for existing affordable housing, and a statewide housing trust fund to help Arlington with the tools we already have in place.”

Audrey Clement: “Create a housing authority that would… [consolidate] all the county’s housing programs under one agency, enabling it to qualify for federal HUD money that it currently still does not qualify for, and leveraging the money that it has to build more affordable housing in this country.

Terron Sims: “We can’t do anything to control property values. So we’re going to be careful with how we invest in certain areas of the county where the affordable housing exists because of market forces. Depending on how development goes in certain areas… we may cause those [lower-income] citizens to go live somewhere else, which is not what we want to do.”

Libby Garvey: “We need to make sure that we don’t become the highway everybody drives through to get other places. I think it’s a shame that we lost the voting member on the WMATA board that we had.”

Peter Fallon: “In the year 2000, somebody sent me something in the mail — that VDOT, the state, wanted to widen I-66. And I thought: heck no. I became a founding member of the Arlington Coalition for Sensible Transportation… and I continue to be opposed to the wholesale widening of I-66, particularly inside the Beltway.”

Terron Sims: “Having lived in this area since 1986, it saddens me that traffic has only gotten worse and there’s no real clear solution in sight. Our transportation problem is a regional issue — something that we’re going to have to tackle with D.C. and Maryland, as well as the Commonwealth as a whole.”

Melissa Bondi: “I too opposed the widening of I-66… I agree that we will need more express bus service that may run from west of Arlington through to the District of Columbia, and also those that start in Arlington.”

Audrey Clement: “I single-handedly took on VDOT in 2009 and challenged VDOT’s decision to proceed with the [I-66] spot improvement project… My efforts were quashed, I got no support from Arlington County Board. They paid lip service to the cause, they said they opposed the widening but they did nothing to stop it.”

Kim Klingler: “My plan, my approach, is a regional one — that we work with [various Northern Virginia localities] to ensure that transportation isn’t just about what’s happening in Arlington. Because, as you know, we’re all impacted by those who come and go across Arlington.”

Terron Sims: “As a published novelist, libraries have a special place in my heart. I think the first thing we need to do to tackle this issue, as well as the nature centers… is we have to implement some budget forecasting.”

Melissa Bondi: “Our libraries, our nature centers, our community centers, our public facilities are the way that many residents interact with their government. We have an affirmative responsibility, and it’s a plus for Arlington that we invest in the maintenance and the operations of those facilities.”

Audrey Clement: “Local government should pay for basic services, not expensive, extravagant, overpriced capital projects, which is what this county is currently doing. I think if the county just took one item off its budget — that is, the Artisphere — that the savings could pay for not only restored branch library service but expanded branch library service… I think the Artisphere was a great concept, but it should be paid for by private philanthropy.”

Kim Klingler: “We know today that we have a capital maintenance backlog for parks and facilities of over $50 million, because we don’t know when we actually need to maintain our parks… Through my campaign I’ve been running through all the parks in Arlington, and I will tell you that some of them are in disrepair. We need to make sure this becomes a priority.”

Libby Garvey: “Cutting back on parks and libraries — those are basic core services. Those are facilities and resources that we have, and we need to keep up what we have before we get something new… You need to fix the leak in the roof before you get a new kitchen.”

Peter Fallon: “In a one billion plus budget, you do not balance it by nickel-and-diming the libraries or the nature centers. And while I fully support public-private partnerships, you don’t shake down the taxpayers and the residents by threatening to close or limit the hours or operation of something they use.”

Peter Fallon: “Virginia, as you probably already know, is a big property rights state… The rules are not always applied the way you and I would expect.”

Melissa Bondi: “We’re still losing too many trees when these houses are being built, and that’s a concern to me.”

Terron Sims: “I walked the lot on Nottingham Street with the pipe stem… I was really shocked by how the developer was able to squeeze the house back there. What I would want to do as a board member is assist those communities in having a much more powerful and stronger say into what is built in their communities — especially when it comes to the size of the house, with respect to height restrictions and width.”

Audrey Clement: “Impose a moratorium on high density development projects like Crystal City, Columbia Pike and East Falls Church, until the county identifies their infrastructure requirements and funds to pay for them.”

Kim Klingler: “One of the comments that developers have said to me is: Kim, sometimes the county really lets us off easy. Because of our current processes that we have in place, a community might not know that an application has actually been put in for a large lot. Whether is be through email, Facebook — I mean most civic associations now have a website or a Facebook — we can use these tools to make sure citizens, residents know that the developer is looking at the land. And if that is the case, they can get ahead of the developer to make sure that we don’t pass these special variances.”

Libby Garvey: “People feel like development is something that’s happening to them, not with them. This is our community, it needs to happen with us. We need to have clear rules.“