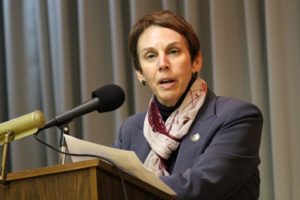 School Board member Libby Garvey has claimed a decisive victory in the Democratic caucus for Arlington County Board.

The caucuses were held on Thursday and Saturday. Out of the 4,314 votes cast, 1,915 were cast for Garvey — more than twice the vote count of her closest opponent. In an email, Garvey expressed gratitude to her supporters and to the other candidates in the race.

“I’d like to thank the Arlington elected officials who endorsed me in this race: Senators Barbara Favola, Mary Margaret Whipple, and Patsy Ticer and School Board Members Abby Raphael and Emma Violand-Sanchez. Their assistance was critical in securing this victory,” she wrote. “I would especially like to thank the other candidates. It was a race between five well-qualified Arlington Democrats, and I’m particularly thankful for the kindness they showed me on the campaign trail.”

Garvey will now be the official Democratic nominee for Arlington County Board in the special election that’s being held on March 27. She will face Green Party candidate Audrey Clement and Republican Mark Kelly, who just announced his candidacy this past week.

“This County Board contest was one of the hardest fought in recent memory, featuring five great candidates from various constituencies in Arlington,” Arlington Democratic Chair Mike Lieberman said in a statement announcing the caucus results. “We are proud that Libby Garvey emerged from this caucus as our nominee. She has been an outstanding School Board Member, and we know she will make an excellent County Board Member as well. We look forward to committing our full party resources behind getting Libby elected on March 27.”

The final vote count, as reported by the Arlington County Democratic Committee: