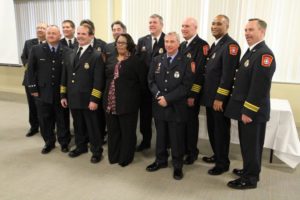 The large number of nearly simultaneous retirements is the result of changes to Arlington County’s retirement health benefits that, according to a fire official, prompted some 200 county employees to retire at the same time.

The fire personnel honored this morning had a combined 477 years of experience. It’s a loss that’s being felt across the department, despite the recent addition of large new recruit classes.

“Never before have so many of our leaders and mentors transitioned into retirement at the same time,” a video honoring the retirees said. “We will continue to hold the traditions you have set forth.”

With 30 to 38 years of experience, some of today’s retirees count both the Sept. 11 attack on the Pentagon and the Air Florida Flight 90 crash among the major incidents they’ve responded to as Arlington firefighters.

“This group of people has contributed so much, they have left such a legacy, that the organization is extremely strong and will survive without them being here every day,” said Fire Chief James Schwartz. “Their spirit will remain, their contributions — what they have shared with us over the course of their career — will remain… Thank you very much for everything you’ve done for us and this county.”