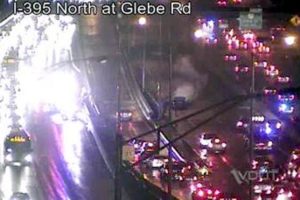 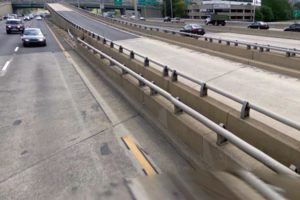 (Updated at 12:30 p.m.) An Alexandria paramedic fell about 30 feet from I-395 into Four Mile Run while responding to a call near Shirlington tonight.

Just before 6:30 p.m. emergency crews were called to I-395 near Shirlington Circle for two separate incidents: a three-vehicle crash in the northbound lanes and a vehicle fire in the HOV lanes, according to Virginia State Police

The medic has been identified by police as 33-year-old Joshua Weissman, a seven year veteran.

Rescuers from Arlington and Alexandria were able to reach Weissman and extricate him from the water. CPR was performed, according to fire radio traffic. He was taken downstream to S. Cleveland Street and then transported via ambulance to Washington Hospital Center with what Thiel described as critical injuries. Authorities initially wanted to airlift the Weissman to the hospital, but were not able to due to the rainy weather, we’re told.

The northbound HOV lanes of I-395 were shut down for an extended period of time during and after the incident. As of 10:30 p.m., three lanes of northbound I-395 remained closed and traffic before the scene was still heavy.

The vehicle fire, meanwhile severely snarled traffic on southbound I-395 during the latter part of the evening rush hour. All HOV lanes were closed for at least a half hour during the fire response.

As of Thursday afternoon, Weissman was still in the hospital with life-threatening injuries. Virginia State Police say they’re continuing to investigate the accident.

Photo (above, right) via Google Maps