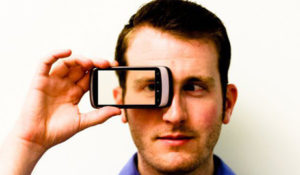 The week celebrates social media — think: Facebook, Twitter, Pinterest, etc. — and “its role as a catalyst in driving cultural, economic, political and social change in developed and emerging markets.” This is the first year that the D.C. area formally hosted events for Social Media Week, which now counts 21 cities worldwide as participants.

Rosslyn’s Social Media Week events will take place at Artisphere (1101 Wilson Blvd) starting at 8:00 tonight. First up is is e-Geaux (beta), an interactive theater event that finds comedy and some cautionary tales in social media. e-Geaux — pronounced “ego” — has been profiled on NPR, DCist.com and elsewhere. Tickets to the show, at Artisphere’s Dome Theater, cost $15.

After the e-Geaux performance is Tweet Slam. Starting at 9:30 p.m., in the Artisphere “town hall” area, poetry will meet Twitter in a contest to come up with the most creative Tweet. Per the event description:

Calling all slam poets, haiku masters and creative tweeps! What poetic wisdom can you impart in 140 characters or less? Come perform your lyrical Tweets in a slam judged by local social media stars and you can win $140 and bragging rights.

Among the judges will be poet Holly Bass and NBC4’s Angie Goff. Admission is free. Drinks are discounted to $2 with an e-Geaux ticket stub.