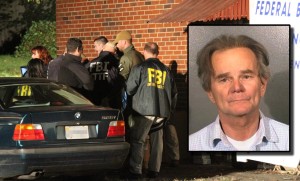 An Arlington man has been sentenced to 40 months in prison for “possessing firearms after being convicted of a felony.”

The charge stems from an incident in October when a number of guns were found buried in the ground near Patrick Henry Drive and I-66. Investigators from the FBI and the Arlington County Police Department used forensic evidence to link the guns to 61-year-old Cherrydale resident and convicted felon Rodney M. Gunsauley.

In all, prosecutors say they recovered at least 35 tubes containing 14 guns and more than 20,000 rounds of ammunition.

Rodney Melvin Gunsauley, 61, a resident of Arlington, Va., was sentenced today to 40 months in prison, followed by three years of supervised release and a $6,000 fine for possessing firearms after being convicted of a felony.

Gunsauley pled guilty on Dec. 8, 2011, to felon in possession of firearms and ammunition. With Gunsauley’s cooperation, law enforcement reported in court today that 33 additional weapons tubes had been recovered in Arlington Va., containing six additional AR15 rifles, five additional handguns to include a 9mm, a 40 caliber and another 45 caliber and 20,000 additional rounds of ammunition.