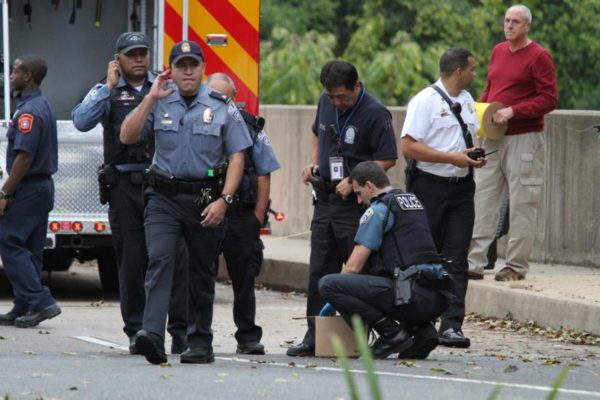 Updates: This developing story has been updated here and here.

Update at 2:50 p.m. — The FBI is now on the scene assisting Arlington police with the investigation, police spokeswoman Det. Crystal Nosal has confirmed. “It’s still continuing the investigation from this morning,” she said. Nosal described the objects found as “several” PVC pipes containing weapons.

Arlington County’s bomb squad and police department are investigating suspicious packages found near a utility box along I-66, at the Patrick Henry Drive overpass.

A VDOT contractor found the objects earlier today and called police, according to Arlington County Fire Department spokesman Lt. Gregg Karl. ARLnow.com is hearing that construction crews working on the I-66 widening project found a disassembled machine gun and several PVC tubes full of metallic objects in the ground.

Patrick Henry Drive was closed in both directions while the bomb squad investigated. Earlier, a bomb squad member carried a box from the site with what appeared to be the butt of a military-style gun. Minutes later, “fire in the hole” was called a small controlled detonation could be heard. The bomb squad has since cleared the scene, after determining the objects were not explosive, and police are now photographing the evidence.

A passerby says he was told by an officer that authorities found “a box of guns.”

“People call in found firearms frequently,” police spokeswoman Det. Crystal Nosal told ARLnow.com. “Officers will make sure they weren’t used in the commission of a crime.”

“The bomb squad was called in to make sure the tubes weren’t pipe bombs,” she added.

Neighbors say the area where the objects were found is a popular cut-through for kids on their way home from school.