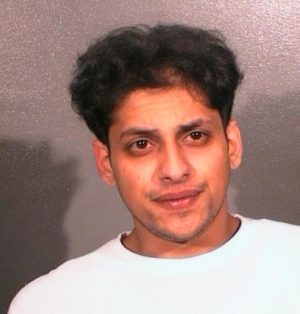 A home invasion armed robbery in South Arlington last week has a connection to a series of bank robberies late last year, ARLnow.com has learned exclusively.

Two men impersonating police officers with a search warrant forced their way into a home on the 300 block of S. Fillmore Street around 11:20 p.m. on Thursday, Feb. 23, according to Arlington County police. One of the suspects held the residents — a woman and two children — at knifepoint in the living room while the second suspect, armed with a handgun, ransacked the house. In the end, the suspects made off with nearly $13,000 in cash and jewelry.

A police source has confirmed to ARLnow.com that the house targeted by the two armed robbers was that of Rafi Khan, 23, who was arrested in December and charged with two counts of bank robbery. Both robberies both took place in Arlington over the course of a week.

Khan’s trial is currently scheduled for May. The exact connection between Khan and the home invasion is unclear, but police have indicated that they believe his home was specifically targeted, telling news outlets that the crime was likely an “isolated incident” and that “there’s no reason to believe that this is an ongoing occurrence.”

In a crime report last week, police issued the following descriptions of the suspects.