The county is gearing up for the kickoff of its Participation, Leadership and Civic Engagement (PLACE) initiative next week. The effort is being launched to improve engagement between residents and the county government.

County Board Chair Mary Hynes proposed the initiative in January to get more people active in their communities, and more involved in key decisions that will shape the future of the county.

Hynes said PLACE consists of many layers so people can choose their preferred level of community participation. Overall, it’s supposed to help bring people together to make a better Arlington.

“What I think I’ve learned the most from more than 25 years of civic activism and elected office is that we’re all smarter together,” Hynes said.

The recently started “Open Door Mondays” sessions are a part of the effort. Hynes says it shows that the County Board is really interested in hearing from residents. The sessions allow leaders to gather suggestions and ideas from people who may not have an interest in attending formal board meetings. 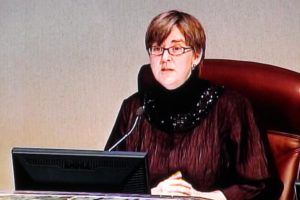 “Good ideas come from all different places,” Hynes said. “Sometimes that person who walks in new and just kind of looks at the landscape and makes what they think is an offhanded comment provides you with a real insight that gives you a new direction.”

Hynes said the county appreciates all of the existing participation from the public, but it’s often limited to a few very active members. She said the current level of involvement isn’t necessarily representative of Arlington as a whole, and could benefit from some refreshing. For example, she’d like to see more young people and seniors becoming engaged in their communities and offering input.

Another goal of PLACE is to provide more avenues for people to find out events or gatherings throughout the county. The hope is that by the end of the year, some sort of online portal will be in place to list neighborhood events and organizations. The portal would also give the government a better idea of what groups have formed and what people are interested in.

Hynes said it’s time to refresh “The Arlington Way,” which was an idea put forth a couple of decades ago. The Arlington Way at its core is defined as an open conversation between the government and the people who live and work in Arlington. Because of the population growth and business expansion throughout the county, Hynes believes the old model has become obsolete.

The PLACE launch events will be held at Artisphere next Thursday, March 15 and Saturday, March 17. There are several 90 minute sessions scheduled for those two days. Attendees can learn more about PLACE, chat with community leaders, learn more about Open Door Mondays and get community groups on the map.

As of last Thursday, more than 100 people had signed up for the events. Attendees are asked to register online for one of the sessions.