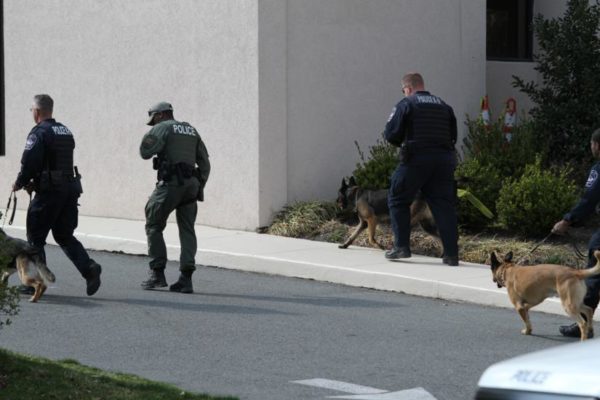 (Updated at 4:20 p.m.) Police are questioning a “person of interest” in connection with a bomb threat at the Sheraton National hotel on S. Orme Street this afternoon.

The building was evacuated around 1:45 p.m. after a bomb threat was phoned in to the hotel. The caller claimed a bomb had been planted on street level and was going to detonate at 3:00 p.m., according to Arlington County Police spokesman Dustin Sternbeck. Police shut down S. Orme Street between Columbia Pike and Southgate Road (the entrance to the Marine Corps’ Henderson Hall) as a precaution.

Sternbeck said officers stopped a “person of interest” — a guest at the hotel — for questioning after the individual was pointed out to police by hotel staff. That individual is still being questioned, but the evacuees have now being let back into the hotel and S. Orme Street has been reopened.

At least a half dozen bomb sniffing dogs were on scene to assist with a search for any type of explosive device. Pentagon Police and Virginia State Police were also on scene. Sternbeck said the basement, garage and ground floor of the hotel were swept by K-9 units. The floor the person of interest was staying on was also swept, he said.