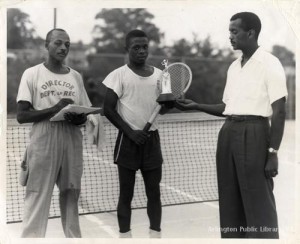 The Arlington Public Library’s work at updating its website has produced a pleasant unintended consequence — an online family reunion.

Recently, the library has been digitizing historical documents and pictures that are stored in the Virginia Room at the Central Library. One of the collections was posted online just in time for Black History Month in February. The Ernest E. Johnson Collection, 1948-1955, features photos from when the Arlington Department of Parks and Recreation was still segregated and had its own “Negro Recreation Section.” Johnson directed the section and was vital in advancing the desegregation of Arlington’s community activities.

A woman who works at Long Branch Elementary saw the photos while doing research for another project, and realized many of them included her family members. That’s when she got on the phone with her cousin, Kathlyn James Avila.

Avila says in addition to recognizing herself and her cousin in the pictures, she spotted her mother and two uncles. One uncle was in a tennis photo, another a photo of a meeting.

“I had never seen those photos before,” Avila said. “I had no pictures of myself from kindergarten, and to even have that, it was very special.”

Avila’s family, the James family, was active in the community and knew Johnson well. She’s grateful that the library posted the pictures and thinks they’re important for others to see.

“There are quite a few black families in Arlington from the 1950s and 1960s that made an important impact on the growth of the black community. I know my family was one of them,” Avila said. “I think it’s very important for people to see black families as role models and activists in the community.”

He points out that although Arlington is considered a progressive community, that wasn’t always the case.

“Back in the 1940s and 1950s, just the notion that Arlington had a section of the Parks and Rec Department called the ‘Negro Section,’ it really makes you pause for a second,” Golkin said. “The Arlington of today is so radically different, and we’re so much the better for it.”

Once Avila saw the photos on the library’s website, she quickly spread the word throughout her family. She said they all logged on to look at the pictures, which brought back emotional memories for many of them. Several of the family members had worked directly with Ernest Johnson to provide activities for African Americans, including her mother, who was Johnson’s assistant.

“That was an important time in our lives,” Avila said. “It was segregated, yet we had Ernest Johnson trying to lift others and be active in the community. He tried to make sure we had all the experiences and activities that anyone would have.”

Golkin said there’s a lot to learn from that period of time, and the photos really bring the stories to life.

“These are people living their lives as best they could with the restrictions that existed at the time,” said Golkin. “Thankfully the people in these pictures were the first to experience the benefits of the integration that came just a few years later.”

Avila spoke of fond memories such as her mother teaching young majorettes how to twirl batons, and of ballet and tap dancing classes. Some of the photos posted online are from performances at a May Day event, which she remembers with pride.

“That special day was so important to us to dress up and perform in front of our families,” Avila said.

Avila contends that for many of the county’s African American youths, being involved in the community activities helped set them up for success.

“I really think that for a lot of us that went on to higher education, it helped provide us with a foundation of arts, of being aware of other cultures and other people,” she said.

Avila considers herself the family historian who gathers photos and puts them onto CDs. She’s looking forward to getting some copies of the pictures to put up in her home, and to send to other family members.