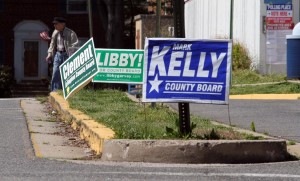 All bets are off for today’s County Board special election, as a combination of a third party candidate and historically low voter turnout mean that it’s anybody’s guess who will emerge victorious.

Two out of the past three times the turnout of a County Board special election was below 19,000, a Republican ended up winning. This year, it’s looking unlikely that even 15,000 votes will be cast out of the pool of 122,882 active registered voters in Arlington.

“I think it’s probably going to end up maybe being 10 to 12 percent [turnout], and I may be overestimating that,” Arlington County Registrar Linda Lindberg told ARLnow.com this afternoon. “Usually in a special election we get closer to 20 percent, but I don’t think we’re going to get anywhere near that this time.”

Though past experience would suggest that the low turnout might spell doom for Democratic candidate Libby Garvey, the fact that there’s both a Republican and a fiscally-conservative Green Party candidate in the race makes any attempts at prognostication difficult.

Democrats are hopeful that they’ll be able to rally more voters before the polls close at 7:00 tonight. Privately, they’re also hoping that the “anti-Democrat” vote splits between Republican Mark Kelly and Green candidate Audrey Clement.

“We are expecting a bit of an uptick in the afternoon, but it’s certainly going to remain low,” Lieberman said. “It’s hard to predict. When there’s very high turnout, our chances go up. When there’s low turnout, it’s much more of a question mark.”

“Certainly I think we are in for a relatively close election,” Lieberman continued. “We remain optimistic about Libby’s chances despite the low numbers.”