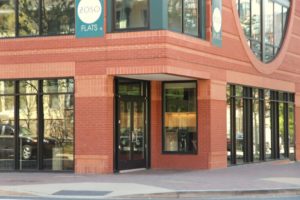 Green Pig Bistro (1025 N. Fillmore St) opened on Wednesday, and already the restaurant is seeing a steady flow of customers.

Arlington native Scot Harlan owns the restaurant and serves as a chef. His co-chef, Will Sullivan, also hails from Arlington.

Harlan has traveled around the world in an effort to perfect his culinary skills and has worked in kitchens of famed chefs like Gordon Ramsay. He made his way back to the area to work at notable local establishments such as 2941 and Inox, but now wants to try his hand at running a restaurant in the community his family has called home for many years.

“We’ve been here a while and we’ve seen this location change from a Sears parking lot to an area hot for 20 to 30 somethings,” said Harlan.

He said one of the things that will make Green Pig Bistro stand out is that it’s not run by a corporate entity, but instead by a chef-owner. Harlan thinks his desire to keep it simple and let the food shine without experimenting with exotic blends of spices in dishes will keep customers coming back.

“I’ve spent the last 10 years doing tiny, 16 touches on a plate,” Harlan said. “I find more value in not going in that direction. You’re not paying for the paint on the plate, you’re paying for the food and ingredients and our staffing. Not for innovation.”

He likes innovation in cooking techniques, but not in flavor combinations. Harlan believes some classic dishes just shouldn’t be messed with.

“Customers don’t always really dig it,” Harlan said. “It’s just a small percentage of customers looking for something like that. I’m trying to get everybody in here.”

Harlan stresses that the restaurant is an American take on a French bistro. But he wants customers to remember that “bistro” doesn’t mean “small restaurant.” Rather, it connotes a certain theme, such as Green Pig’s “nose-to-tail” cooking, in which all of an animal is used.

The menu will change slightly based on which items are available seasonally. One of the more unique dishes available right now is a “rabbit cake,” which is the Green Pig’s spin on a crab cake. More traditional items, such as hamburgers or steaks, are also available. Harlan’s pastry chef training shines through in simple desserts, such as a donut with chocolate and peanut butter ice cream.

The back of the restaurant houses most of the seating, and patrons can see into the kitchen. The front, which overlooks 11th St N. and Fillmore St, has a bar and a few tables. Harlan believes many customers will like the bar area not just for the food and ambiance, but also because he tries to keep beer prices below those of many nearby establishments.

For now, Green Pig Bistro is only open in the evenings, but the plan is to start serving brunch in about a month. The restaurant is closed on Tuesdays.