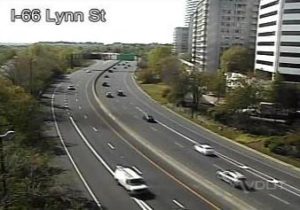 The incident started around 5:30 a.m., when police were called for a man spotted banging on a vehicle in a parking garage on the 1900 block of N. Lynn Street, in Rosslyn. The man fled on foot before police arrived, and building security witnessed him heading in the direction of I-66, according to Arlington County Police spokesman Dustin Sternbeck.

Minutes later, police received a call for a pedestrian struck on I-66 near Route 110.

“A male subject was in the eastbound I-66 travel lane when he was struck by an eastbound van,” Virginia State Police spokeswoman Corinne Geller told ARLnow.com. “The van was coming through the curve and was unable to avoid striking the pedestrian in the lane.”

“The driver of the van, 68-yr-old Linden, Va. male, was not charged in this incident,” Geller said. “The pedestrian, Nicholas F. Brizzi, 26, of Arlington, remains in the hospital with life-threatening injuries.”

Arlington County police helped to direct traffic on I-66 for an hour while Virginia State Police investigated the accident, according to Sternbeck.