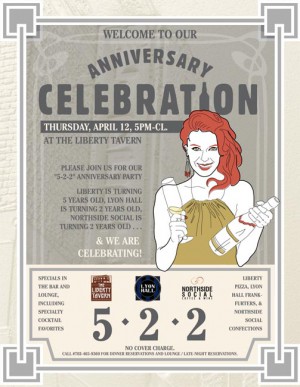 Liberty Tavern, Lyon Hall and Northside Social will be each be celebrating their anniversary tomorrow.

The sister establishments will be holding a joint anniversary event at Liberty Tavern (3195 Wilson Blvd) tomorrow night (Thursday, April 12). From 4:00 p.m. until close, the restaurant will be offering two specialty cocktails from its opening menu — the “Pursuit of Happiness” and the “Industrial” — for $5. Starting at 9:00 p.m., at the bar and lounge, Liberty Tavern will also be offering complimentary Liberty pizza, Lyon Hall frankfurters and Northside Social confections.

There’s no cover charge for the event. All three eateries first opened their doors in April — Liberty Tavern in 2007 and Lyon Hall and Northside Social both in 2010.