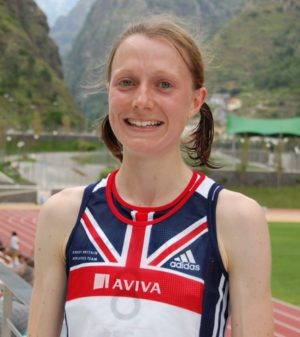 Michael Wardian isn’t the only elite marathon runner in Arlington.

Arlington resident Claire Hallissey, a 29-year-old transplant from the UK, was the top British female finisher in the London Marathon over the weekend. So impressive was her time of 2:27:44 that it landed her the third and final spot on the British women’s marathon team at this summer’s Olympic Games in London.

“The crowd in London on Sunday was fantastic and the Olympics will be even bigger and better,” Hallissey told The Sun newspaper in the UK. “I’m still ecstatic over my run. I’d hoped I could run a time like that and that everything would fit into place on the day.”

Hallissey’s Olympic-caliber run has captured the attention of nearly every major British media outlet, including The Sun, BBC News, The Guardian, The Independent, the Press Association newswire, the Scotsman, and others.

Hallissey was born in Watford, outside of London. After attending the University of Cambridge and then earning a doctorate at Bristol University, she moved to Arlington with her husband Matt, who had been offered a job as a transportation planner, according to various outlets.

END_OF_DOCUMENT_TOKEN_TO_BE_REPLACED

More Stories
Morning NotesBallston to Get Its First Bikeshare Station