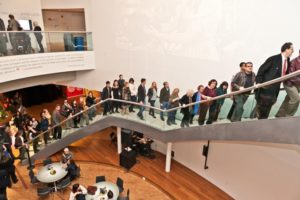 (Updated at 10:20 a.m.) The good news for Artisphere, the county’s struggling cultural center in Rosslyn, is that it just had a certified hit in the form of its month-long Frida Kahlo photo exhibit. The bad news is that it’s still falling short of meeting a number of financial goals laid out in a new business plan last year.

The Frida Kahlo exhibit, held from Feb. 23 to March 25, drew 13,119 visitors to Artisphere, according to a recently-released quarterly report. That’s well over three times the audience of Artisphere’s next most popular exhibit to date, a collection of Mongolian clothing, artifacts and art that drew 3,831 visitors over the course of a month and a half in the spring of 2011.

Though the Kahlo exhibit helped bring in visitors, Artisphere failed to capitalize in terms of catering and concession revenue. Artisphere has yet to find a “resident caterer” to pick up the slack left by the closing of the venue’s in-house bar/restaurant last year. As a result catering and concession income for the first three quarters of the financial year was only $24,170, compared to the prorated business plan goal of $63,188. 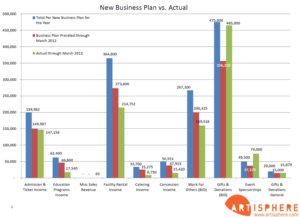 Artisphere is also falling short of meeting its goal for facility rental income — a key component of the new business plan. Rental income has brought in $214,752 through the third quarter, compared to the goal of $273,600. In a letter to County Manager Barbara Donnellan, the Arlington Economic Development (AED) officials now in charge of overseeing Artisphere predict that rental income will pick up in the fourth quarter and put Artisphere “only slightly under its projections” for the year.

Another disappointment is income from education programs — $17,540 compared to a Q3 goal of $46,800 — but Artisphere managers expect to make up some ground through revenue from summer camps.

Artisphere has “seen many recent successes in its programming, bringing in very popular performers and events that have attracted significantly higher levels of ticket sales,” according to AED officials. That momentum may be difficult to maintain, though, following the sudden resignation of Artisphere’s Programming Director last month. 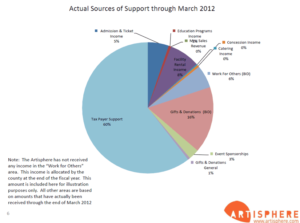 The biggest revenue bright spot for Artisphere so far has been donations and event sponsorships, both of which are expected to meet or exceed the goal for the year. Most of that income, however, came from a single source: the Rosslyn Business Improvement District.

Other numbers are trending in a positive direction. Despite the fact that Artisphere’s operating hours have been more than cut in half, overall visitorship has been largely unaffected. And, partially as a result of the cut in hours, the “density of visitors” has increased from an average of 7 visitors per hour in December to 54 visitors per hour in March. Still, attendance at three of Artisphere’s five performance venues — the Dome theater, Spectrum theater and education lab — are well below expectations.

Artisphere expects to come close to meeting its $3.6 million expense budget for the year. As of March 2012, total revenue was $958,561. The deficit between expenses and revenue — projected at $2.3 million for the year — will be paid for by county taxpayers.

In introducing the Q3 report, AED officials wrote to Donnellan: “Although the Artisphere business plan was carefully considered and was conservative in many of its revenue projections, the first twelve months of operation under the new plan will be critical to determine the efficacy of many of those assumptions.”