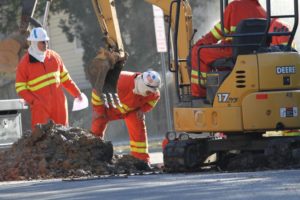 Washington Gas is investigating possible problems with a 16-inch gas transmission line that runs along Route 50 and Fairfax Drive in the Radnor – Fort Myer Heights area near Courthouse.

Authorities have received multiple calls from people in the area who have smelled mercaptan, the odor additive in natural gas, according to Arlington County police spokesman Dustin Sternbeck. Washington Gas has apparently traced the smell back to the gas transmission line, but it’s unclear what exactly is wrong with it. Road construction is taking place in the area, but Sternbeck said the gas company is investigating whether the weight of the vehicles passing by on westbound Route 50 is what’s actually causing problems.

Earlier road closures in the area have been lifted, Sternbeck said. Crews from VDOT and Washington Gas are still on the scene, trying to determine the extent of the problem.