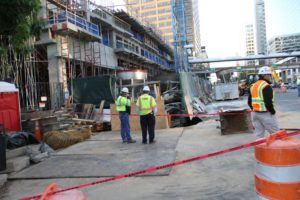 (Updated at 6:50 a.m.) Several lanes of a busy Rosslyn street are blcked due to a major water main break.

Two to three lanes of Ft. Myer Drive have been shut down between Lee Highway and Wilson Boulevard until further notice. The closures are due to a major, 16-inch water main break at the 1812 N. Moore Street office building construction site near the Rosslyn Metro station.

The break happened around 12:30 this morning, according to police. The Metro station was briefly closed for inspections after the break but has since reopened. The pickup spots for some buses have been moved as a result.

About 8 feet of standing water has reportedly accumulated an the bottom of the construction site. Crews are now planning to dig up a portion of Ft. Myer Drive in order to repair the ruptured main.