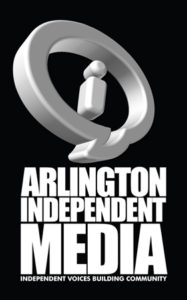 Arlington may get its very own independent community radio station by the end of the year.

Arlington Independent Media is in the planning stages of what may eventually become a low power FM community radio station. AIM, best known for its local cable television channel (Comcast channel 69, Verizon channel 38), has already designated funds for the construction of an audio booth in its Clarendon studios to accommodate residents who want to learn more about audio production. The booth is expected to be built by this fall, and will serve as the production hub for a potential radio station.

The station will likely start out as an internet-only streaming station, but may eventually be broadcast on a low power FM frequency if AIM can obtain the necessary FCC permission. That permission is by no means guaranteed, AIM programming coordinator Lauree McArdle said, because extra FM bandwidth is scare in the D.C. area.

Even if special FCC permission is granted, the signal probably won’t reach all of Arlington County, since low power FM signals are limited to 100 watts, which can only reach a radius of about 3.5 miles and is subject to interference from larger radio stations. Given a choice, McArdle says the signal would likely be targeted at the county’s lower income areas.

McArdle says she’s heard from 20 to 30 people in who are interested in helping out with a radio station. With the help of volunteer DJs and hosts, the station would probably broadcast an assortment of live and taped programming 24 hours per day.

“I don’t think we’ll lack for programming, because I have number of people who are interested in talk radio and that sort of thing,” McArdle said. “I think it will be a mix of talk programs as well as, hopefully, some music.”

AIM will be hosting a meeting next week for anyone interested in being a part of a “vibrant and active community radio presence in the county.” The meeting will be held from 7:00 to 10:00 p.m. on Tuesday, June 5, at the AIM studio at 2701-C Wilson Blvd.

If all goes well, McArdle says the radio station could start broadcasting online shortly after the audio booth is completed this fall.