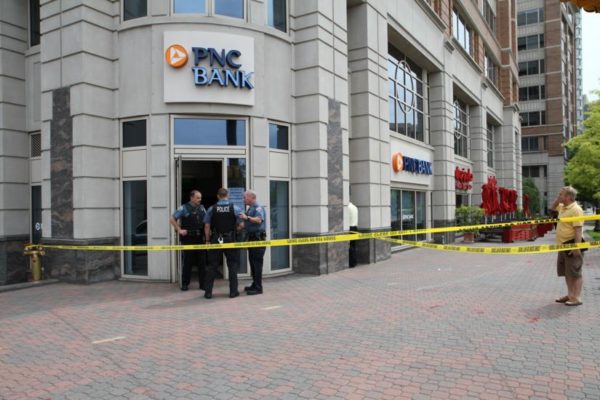 (Updated at 11:00 a.m.) A man has been arrested after a robbery at a PNC Bank branch in Ballston.

The PNC Bank at the corner of Wilson Boulevard and N. Glebe Road was reportedly robbed around 9:45 a.m. According to police, a black male in his early to mid 20s — who was wearing a purple and red wig, a yellow shirt and sunglasses — entered the bank and passed a note to a teller demanding money and claiming to have a gun.

With the money in a zebra-striped Harris Teeter shopping bag, the suspect fled into an alley and was seen changing his clothes by a witness, who immediately called police. A dye pack embedded in the stolen cash exploded and the suspect — seeing a witness following him — then started running to the nearby Ballston Metro station, leaving the money behind, according to police.

The suspect was arrested without incident by an Arlington patrol officer at 9:51 a.m., just outside the Metro station, only five minutes after the witness first called police, according to department spokesman Dustin Sternbeck. The suspect had only $6 on him at the time of his arrest.

Sternbeck hailed the arrest as an example of police “working with the citizens of Arlington County” to quickly solve a crime. He noted that police don’t necessarily encourage witnesses to follow criminals, but said that the witness in this case “maintained a safe distance” between himself and the perpetrator and alerted police immediately.

Update at 3:00 p.m. — Police have identified the suspect as 26-year-old Nathaniel Rush of College Park, Maryland