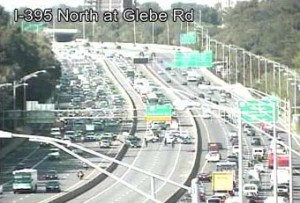 The HOV lanes of I-395 have been shut down near the Glebe Road exit due to a serious accident involving a motorcycle.

Initial reports indicate the accident happened when a vehicle ran into a motorcycle. The motorcyclist is being treated for critical injuries and will be transported to a local trauma center via ambulance, according to Arlington County Police spokesman Dustin Sternbeck.

All HOV traffic is being diverted onto the main southbound lanes of I-395. Southbound backups extend to the 14th Street Bridge.

Update at 2:45 p.m. on 6/5/12 — An update, per Sternbeck: “The driver was charged on scene by Virginia State Police with Reckless Driving and violation of HOV-3. As for the condition of the motorcyclist, he suffered significant injuries but is expected to survive.”