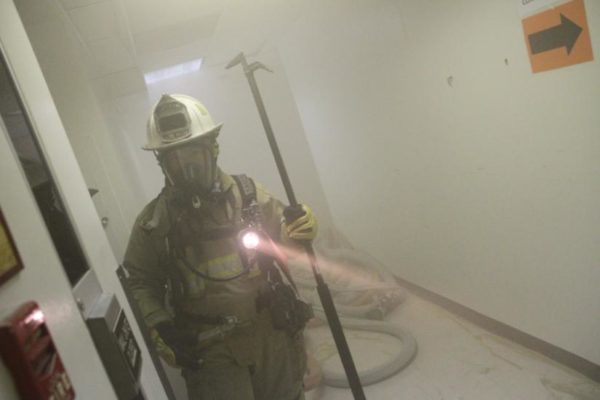 The Arlington County Fire Department and numerous other local fire departments are participating in a month-and-a-half-long study in Crystal City that could help save lives.

The “Fire Fighter Safety and Deployment Study,” organized and funded by the National Institute of Standards and Technology (NIST) and the International Association of Fire Fighters (IAFF), is putting real-world firefighters in realistic firefighting simulations in a vacant Crystal City high rise. The goal of the study is to determine how firefighters can be most safely and effectively deployed in the event of a fire in a high rise building.

On days when the study is being conducted (most weekdays between now and July 13), workers and residents can see the various agencies represented in the long line of fire trucks parked along 23rd Street. Between 25 and 30 Arlington fire personnel participate on study days, according to Capt. Chuck Kramaric, ACFD’s liaison to the study. ACFD is providing firefighters and logistical support to the study.

On Tuesday, Arlington’s latest fire recruit class was among the participants. Firefighters were asked to strap on portable heart rate monitors and all their firefighting gear, and — in crews of 3, 4, 5 or 6 — climb the stairs to the tenth floor of the vacant building. There, study organizers had set up makeshift plywood cubicles, placed a 130 pound victim dummy in one of the cubicles, filled the floor with dark theatrical smoke, and set up fire simulation displays in different parts of the floor.

Acting on instructions given by organizers during a briefing that morning, firefighters lugged a heavy, sand-filled hose (meant to simulate the weight of a hose filled with water) through the smoke-filled floor, “extinguished” the simulated fires, and located the simulated victim. The entire exercise was monitored and timed by NIST personnel.

In the end, study organizers hope to use the data collected to make suggestions to local fire chiefs and policy makers regarding the optimal number of firefighters needed to tackle high rise fires. Even though modern high rise buildings are, by law, equipped with sprinklers and other fire suppression systems, Kramaric said the recommendations from the study could be especially helpful for fires in older buildings.

“There are so many old mid-rise buildings without the modern systems in them… that’s where this is going to be beneficial,” he said. “This is a pretty big deal for the fire fighting community.”

Kramaric also noted that fires can still get out of hand in modern high rises in certain situations, like during construction, renovation and demolition. In August 2007, two New York City firefighters died during a fire in the Deutsche Bank building, which had been damaged during 9/11.