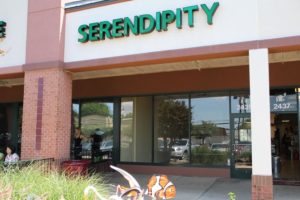 A new frozen yogurt store may be coming to the Lee Harrison Shopping Center.

According to a Facebook page, a Tutti Frutti Frozen Yogurt store is coming to the shopping center.  Building permits were issued late last month (May) for the store, located at 2439 N. Harrison Street. Tutti Frutti will replace the former Serendipity store, which sold home furnishings, decorations and gifts.

With 580 locations in 23 countries, Tutti Frutti says it’s “the largest self-serve frozen yogurt brand in the world.” The franchise has a roster of more than 50 flavors of frozen yogurt, along with numerous fruit, candy and other toppings.

Hat tip to Along the Pike