A new hair salon is coming to Williamsburg Shopping Center in North Arlington, into the space formerly occupied by Zinga! Frozen Yogurt.

Adil’s Salon and Spa is looking to open at 2914 N. Sycamore Street by the end of February or early March, co-owner Adil Karkas tells ARLnow, despite just signing the lease and receiving keys this week.

“We wish we were going to open by Valentine’s Day,” Karkas says.

Karkas and his wife and co-owner, Nancy, have worked at area hair salons for more than two decades, including in D.C., Clarendon and Vienna. This is also their second salon, having previously opened one overseas. They’ll be joined by Karkas’s sister-in-law Linda, who is a colorist, making this business a family affair.

“Arlington is the place to be,” Karkas says on why he decided to open his own salon in the county.

The previous tenant Zinga! Frozen Yogurt closed in October 2020 after a seven-year run and a management change in that location.

Elsewhere in Williamsburg Shopping Center, a new bank tenant is still being sought to replace United Bank, which closed a year ago. Also in the center is Smoking Kow BBQ, named by the Washington Post in 2019 as one of the best barbecue joints in the region.

Zinga! Frozen Yogurt has closed in Arlington’s Williamsburg Shopping Center, though it’s not immediately clear if the closure is permanent.

The froyo shop closed last week, and a “for lease” sign was placed in the window. As of Friday, the leasing sign was down, but the store remained closed and many of the furnishings appear to have been cleared out.

No information about the closure was posted on the Zinga Facebook page, which less than two weeks ago was happily posting about new fall flavors and job openings.

Zinga first opened in the shopping center, at 2914 N. Sycamore Street, in 2013. Another nearby location of the small froyo chain, in Falls Church, closed in 2018. 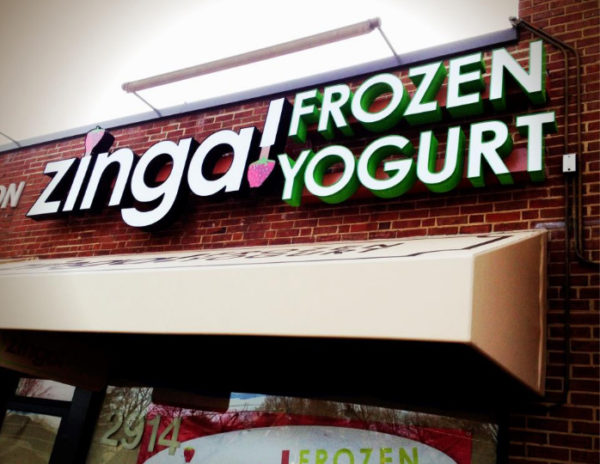 Williamsburg frozen yogurt shop Zinga is now under new management, though loyal customers shouldn’t expect to see too many changes.

The store, located in the Williamsburg Shopping Center at 2914 N. Sycamore Street, will now be operated by Yobe, a Louisiana-based frozen yogurt chain. One of its new managers, Brittany Uribe, told ARLnow that the Williamsburg location will retain the Zinga name, however.

“Everyone was happy with the way it is, so why change it?” she said.

Zinga, which operates half a dozen other shops around Northern Virginia, first opened the Arlington location in 2013. But Uribe says its owners wanted to get out of the business, and sold their stake to Yobe instead.

She doesn’t plan to change much about the shop itself, other than adding a few new flavors; cookie dough is first on her list.

Uribe also hopes to start offering a few new specials to lure customers in, like offering yogurt for half-off after 6 p.m. and charging a flat fee for cups (no weigh-in required) on Wednesdays. 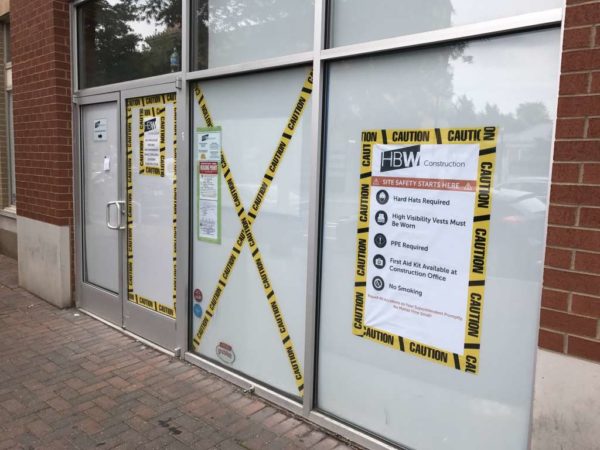 A froyo shop is becoming a Verizon store.

The former Pinkberry along the 2900 block of Clarendon Blvd is becoming a Verizon store. Interior construction is currently underway and the store is expected to open on Monday, Oct. 23, according to the Verizon website.

Verizon stores offer wireless plans, smartphones, cases and other products and services. The only other Verizon-operated store in Arlington is in the Fashion Centre at Pentagon City mall.

It was previously rumored that Verizon was looking at a portion of the former American Tap Room space in Clarendon for a retail store.

Frozen yogurt fans who frequent the Menchie’s at Penrose Square will now have to go cold turkey.

The company closed its store at 2405 Columbia Pike on New Year’s Eve, according to a Menchie’s representative. The froyo shop opened roughly four years ago.

“We closed the location because it simply wasn’t making any money,” said company representative Camey Turpin. Menchie’s has no plans to open another location in the area anytime soon. The closest Menchie’s store is along U Street in Northwest D.C.

It wasn’t immediately clear what might replace the business. Arlington County has not recently issued any building permits for that address.

The Pinkberry frozen yogurt shop in Clarendon has closed.

A worker was changing the locks at the store this afternoon, which is usually a sign that a business has been kicked out by its landlord. Later in the evening, the door handles could be seen chained together from the inside, and a letter from Arlington County was visible on the floor.

Over the past two years Pinkberry has closed for the off-season, only to quietly open up again when the weather started to warm up. It’s yet to be seen whether Pinkberry will rise again, the lone survivor of the once–vibrant Clarendon frozen yogurt scene, or whether it has finally closed for good.

(Updated at 9:45 p.m.) The Pinkberry frozen yogurt shop in Clarendon is back open after apparently closing for a period of time.

The shop, at 2930 Clarendon Blvd, is marked closed on Yelp and as soon as mid-March a tipster asked ARLnow.com whether it had closed for good.

“For the past couple months, the Pinkberry in Clarendon has not been open during normal business hours,” said the tipster. “There’s no sign up to say that it’s closing or indication that anything is wrong.”

As of today, the store was open and serving customers, with a sign saying “Pinkberry is now open” outside. Signs posted on the windows say the store is now hiring.

We’re told the store closed for the winter, but didn’t post any signs stating that the closure was temporary. Pinkberry’s parent company said such decisions are up to the individual franchisees.

The lone employee inside around 5:30 today said she wasn’t sure when the store first reopened.

The store also closed in late 2014 after its franchise owner went bankrupt. It then reopened last May, before apparently closing over the winter.

The man in the Yogi Castle is giving Pentagon Row a glimpse of a world without frozen yogurt.

Yogi Castle has not responded to a request for comment but the Pentagon Row store has been removed from the regional chain’s website. No word yet from landlord Federal Realty Investment Trust as to future plans for the storefront.

Froyo first came to Pentagon Row with the opening of Yogiberry in 2012. A year later, Yogiberry closed and Yogi Castle opened steps away. 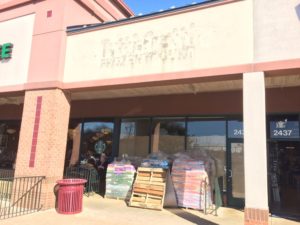 Another Arlington froyo joint has bitten the dust.

Tutti Frutti Frozen Yogurt, at 2439 N. Harrison Street in the Lee-Harrison Shopping Center, recently closed its doors. The store’s sign has since been taken down and brown paper now covers the windows.

It’s the second Tutti Frutti shop to close in Arlington this year; a store in Pentagon City closed in May.

So far there’s no word as to what might replace Tutti Frutti in the Lee-Harrison Shopping Center, which is located along Lee Highway.

The frozen yogurt store FroZenYo has closed its doors.

The store opened in 2011 amid a boom in local froyo joints. That expansion has gone cold and turned into a contraction.

A sign recently taped to the door said the FroZenYo at 2231 Crystal Drive is no more.

“This location is permanently closed,” the sign says. “Thanks for all of your business. Please visit our Eye Street location [at] 1634 I Street NW, D.C.”

The closure follows the shuttering of FroZenYo locations in Ballston and Rosslyn this year.

About a half a dozen frozen yogurt shops remain in Arlington, including Pinkberry in Clarendon and Menchie’s on Columbia Pike.

The Tutti Frutti frozen yogurt store at 1301 S. Fern Street in Pentagon City, across from the Costco, has closed.

The store closed recently and as of Monday it appeared that the furniture and froyo machinery had been cleared out.

The Tutti Frutti Pentagon City location first opened around the beginning of 2013. A north Arlington Tutti Frutti location, which is not owned by the same franchisee, remains open at 2439 N. Harrison Street, in the Lee-Harrison Shopping Center.