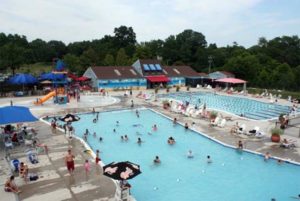 Next week the water park at Upton Hill Regional Park will host one portion of what’s being called the “World’s Largest Swimming Lesson.”

At 10:30 a.m. on Thursday, June 14, children will gather at Upton Hill (6060 Wilson Blvd) to take part in a swimming lesson that will be held at the same time as lessons at 500 other pools and aquatic facilities around the world. The event is part of the U.S. Consumer Product Safety Commission’s (CPSC) “Pool Safely” campaign, a national public education effort.

The event will attempt to break its own Guinness-certified record from last year. In 2011, more than 20,000 kids and adults on five different continents participated in the World’s Largest Swimming Lesson. While the goal of the event is to set a new world record, the ultimate goal of the campaign is to reduce child drownings, near-drownings and entrapments in pools and spas.

This year the campaign’s focus is on populations most at risk of drowning: children younger than 5 years old (who represent nearly 75 percent of child drowning fatalities) and African-American and Hispanic children between the ages of 5 and 14, who, according to the Centers for Disease Control and Prevention, drown at higher rates than white children. CPSC reports that annually there are 390 pool or spa-related drownings for children younger than 15.