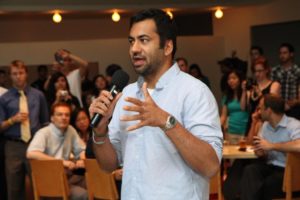 Actor Kal Penn met with more than 100 young supporters of President Obama in Rosslyn and on Columbia Pike last night.

At Cafe Asia in Rosslyn, Penn spoke to a young professionals event about the importance of the upcoming presidential election.

“The stakes in this election are extremely high and none of us want to see the country move backwards,” Penn said. “Obviously Virginia is a battleground state, so there are a lot of resources on both sides of the aisle being poured in here.”

Penn, 35, spent two of the past four years working in the Obama White House, in between acting jobs. He said he’s again taking a break from his acting career to make sure the president wins a second term in office.

“I loved and felt very honored to serve the president for two years and a lot of folks are doing their part… not just actors but teachers, firemen, policemen, students, young entrepreneurs,” Penn said. “As much as a love the movie career… seeing what the stakes are and seeing what the alternative is just makes you want to do everything you can between now and November to get the president re-elected. I feel lucky that I can go back to my creative job, but right now when we do events like this, it’s a little more serious in tone.”

In a question and answer session, Penn couldn’t escape a query about his showbiz career, which has included roles in movies like Harold & Kumar Go to White Castle and National Lampoon’s Van Wilder, and TV shows like House and How I Met Your Mother.

“What was more fun, working at the White House or working on House?” one young man asked. The White House, Penn replied. 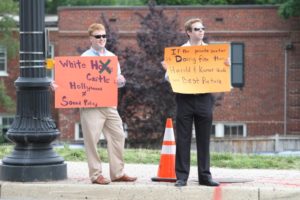 Penn was joined by former White House Chief Technology Officer, Arlington resident, and possible candidate for Virginia lieutenant governor Aneesh Chopra, who spoke passionately about the role of young people and Asian Americans in propelling the president to victory in 2008.

After the event in Rosslyn, Penn and Chopra met with phone bank volunteers at the Obama campaign’s Arlington office at 2408 Columbia Pike. Protesters held anti-Obama signs outside both the Rosslyn and Columbia Pike events.

Among the messages on the signs were references to Penn’s movies, including: “Obama & Kumar Go To Debt Castle” and “If the private sector is ‘doing fine’ then Harold & Kumar should win Best Picture.”

END_OF_DOCUMENT_TOKEN_TO_BE_REPLACED

More Stories
Ask Adam: How Much Home Can I Afford?New Pedestrian Paths Being Added to S. Joyce Street